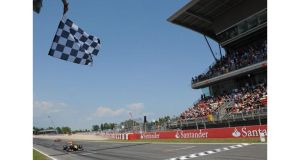 Sebastian Vettel takes the chequered flag ahead of Lewis Hamilton to open a 41-point lead in the championship. Photograph: Dimitar Dilkoff/AFP/Getty Images

Motor Sport:Sebastian Vettel held off a determined late charge from Lewis Hamilton to continue his stunning start to the Formula One season. It is now four victories in five races this season for the reigning champion after he took the chequered flag at the Spanish Grand Prix by just 0.6secs from Hamilton in his McLaren.

The Red Bull star now has a commanding 41-point lead over Hamilton going into next weekend’s blue-riband event, the Monaco Grand Prix.

On a three-stop strategy Jenson Button was a fine third ahead of pole man Mark Webber, with the leading quartet remarkably the only drivers to finish on the same lap such is the dominance of Red Bull and McLaren at present.

It is the first time in 11 years the driver on pole has not taken the win at Barcelona’s Circuit de Catalunya.

It was a superb duel between Vettel and Hamilton towards the end, the duo both having made four stops, and with the remainder of the field trailing in their wake. The problem, however, is the sweeping final turn at this circuit, a relatively fast right-hander, as Hamilton was never close enough to make it count on the straight that followed.

Although always within a second as they crossed the DRS activation line, the point at which Hamilton could open up the rear wing for greater straight-line speed, the gap was always too large on the run down to the first corner.

This track was always going to be the acid test of F1’s new overtaking regulations bearing in mind there had been a miserly 110 passes in the previous 16 seasons. The DRS certainly did not have the same effect here as it did in the last race in Turkey where there were a record number of overtakes.

Instead, the new Pirelli tyres were the dominant factor, combined with pit-stop strategy, which varied considerably amongst all the leaders. For the home fans, and it was surprising to see empty spaces in the main grandstand which is normally packed to the rafters, they were at least treated to a stunning start from Fernando Alonso.

From fourth on the grid, the Spaniard conjured a lightning getaway as he first eased past Hamilton before attacking the Red Bull duo down the inside towards turn one. The roar from the majority of the 78,000 crowd was electrifying, and for the first 10 laps he offered up hope of a home victory.

In truth, however, that was never on the cards, not after Ferrari were forced to use extra sets of the faster, softer rubber to get Alonso up to that fourth spot on the grid. Come the end of the race Alonso had also made four pit stops, a sign of the times in F1 these days.

However, compare that to Button who brilliantly managed his tyres and only had to take on fresh rubber on three occasions. It was a topsy-turvy race for the 2009 world champion as he endured a wretched start, dropping from fifth on the grid to 10th by the end of the first lap.

Yet by careful management of his tyres, something he is renowned for, Button carved his way up the field, albeit by sheer talent alone just over two-thirds of the way through the race. In two laps Button went from fifth to third as he first skilfully tackled Webber around the outside of turn one prior to diving under Alonso into turn 10 shortly after.

Button had managed to do to Alonso what Webber had failed to do for the preceding 30-odd laps because try as the Australian might, he could not get by the 29-year-old. It was the defining stage of the race for Button, enabling him to join Vettel and Hamilton on the podium.

As for Webber, he even failed to pass Alonso in the pits at one stage, the duo emerging at the same time on lap 29 and almost colliding, only for the former having to yield. In the end, Alonso’s early fourth stop — six laps prior to Webber — proved the difference because clear air for the Australian enabled him to then pull away and take fourth, with the home hero fifth, and an embarrassing lap down.

Astonishingly, they were the only drivers to finish on the same lap come the conclusion after 66 laps, with the Mercedes duo of Michael Schumacher having the upperhand over team-mate Nico Rosberg for once as they finished sixth and seventh.

From last on the grid after a fire in practice prevented him from competing in qualifying, Nick Heidfeld was a stunning eighth in his Renault ahead of Sauber pair Sergio Perez and Kamui Kobayashi, with Force India’s Paul di Resta just outside the points in 12th.