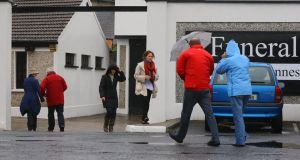 The streets of Passage East in Co Waterford were quiet yesterday afternoon as a community gathered to mourn three brothers who had died in a fishing tragedy this week.

There was little sign of life in the fishing village as one person after another made their way along the winding road into Waterford city to pay their last respects to three of their own, Paul (49), Kenny (47) and Shane Bolger (44) as they lay in repose before making the journey home today.

A lone car waited to catch the ferry across the river Suir to Ballyhack in Co Wexford as the combination of driving rain and descending mist reduced the far shore to a greying blur.

Mourners gather
A stream of mourners made their way to Tom Hennessy’s funeral home in Johnstown in the city to where Margaret Bolger sat flanked by her sons Anthony and Michael, and her daughters Paula and Linda .

Paul – or Bully as he was affectionately known – had one daughter, Rachel, while Shane – or Jock as he was often called – had two children, Calum and Martha Kay, with his wife Lucy while Kenny lived at home with his mother.

Among those paying their respects was retired Suir river pilot, John Walsh who was born two doors away from the Bolger family in Passage East, knew them and still met them regularly when they went over to Dunmore East, where he now lives, to set out on their lobster fishing trips.

“I knew them all well – they were grand lads. I fish for mackerel myself and Kenny was always on to me not to forget them when it came to the mackerel, they used to use the mackerel as bait for the pots. He put his number into my phone two years so I could ring him any time I had mackerel.”

Lost at sea
As well as being a pilot and fisherman, Mr Walsh also served with Dunmore East RNLI for 30 years including 13 years as cox while he is also the chairman of the Dunmore East Lost at Sea memorial committee where the names of those claimed by the sea are now remembered.

“We’ve had some terrible tragedies here over the years and there isn’t a year goes since we put up the memorial in 2000 by that we don’t add a name – already this year we’ve remembered John Flynn – now sadly we have another three names to add, another three fine lads lost.”

Dogged Armagh fail to stop Dublin claiming place in final 06:00
‘It wasn’t down to anything dramatic I said . . . It was down to the players’ 06:00
Waterford get up off the floor to turn the tables on Kilkenny 06:00
Insurance reform group welcomes court ruling in personal injury case 05:29
Hospitality sector may take four years to recover, Supermac’s claims 05:27