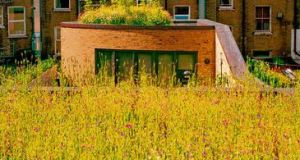 A "green roof" would help to greatly reduce run-off from rainfall in areas such as Dublin's docklands.

Dublin-based architect Laurence Nesbitt maintains that retrofitting “green roofs” to office and apartment buildings could play a vital role in reducing flooding in urban areas, such as the city’s docklands.

In his thesis for an MSc in architecture, Nesbitt measured 403 existing flat roofs with an area of 17.5 hectares (about 43 acres) in the docklands area, concluding that a cover of greenery would reduce run-off by at least 30 minutes and up to 12 hours.

“This area has a high density of commercial and residential apartments that have flat roofs and a long history of flooding,” he says. But no green roofs were installed during the boom “due to a lack of foresight and joined-up thinking” by public agencies.

“In Ireland, the earliest grass roofs can be traced back to the Unesco site at Newgrange, Co Meath,” he says. In recent years, development of green roofs “has been fragmented . . . Ironically, the aftermath of the housing crash has provided the space and time for forward thinking to be applied.

“By reviewing similar green roof policies in the UK and throughout Europe, Irish policy makers now have the opportunity to begin a sustainable approach.”

If Dublin wanted to be counted among cities going green worldwide, it could start by retrofitting green roofs to blocks of flats owned by the city council as a “message” to the private sector.

“Financial incentives or tax benefits to the commercial community should be considered,” according to Nesbitt.