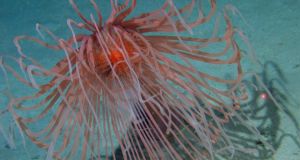 Using a remotely operated vehicle, the 14 scientists on the Celtic Explorer came across a giant hydroid that was more than half a metre in diameter. 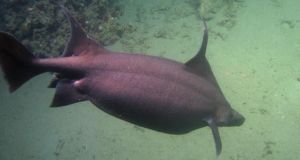 A deepwater sailfin rough shark was among the creatures identified by the Marine Institute research team. 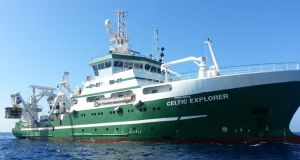 The three-week survey on board the Marine Institute’s research vessel, Celtic Explorer, travelled to the Whittard Canyon on the Irish Atlantic margin.

A rare giant hydroid, a deepwater rough shark and 200-year-old clams and oysters are among specimens collected by a research team during a deep-sea biodiversity voyage west of Ireland.

Marine organisms which may contain anti-bacterial and other pharmaceutical properties were also gathered by the Marine Institute team, led by Louise Allcock of NUI Galway.

The three-week survey on board the Marine Institute’s research vessel, Celtic Explorer, travelled to the Whittard Canyon on the Irish Atlantic margin, which is twice the depth of the US Grand Canyon.

Whittard, which is southwest of Ireland and west of Brittany, is one of 43 submarine canyon systems on the Irish Continental margin.

Using a remotely operated vehicle (ROV), the 14 scientists on board came across a giant hydroid which was over half a metre in diameter, the two-century old shellfish, a rare 5kg sponge, and a deepwater sailfin rough shark.

The hydroid, which is said to use its tentacles to catch fish, belongs to a taxonomic group related to corals and jellyfish and thrives on sandy bottoms with a good current in deep water.

Marine Institute research vessel programme co-ordinator Aodhán FitzGerald noted that the use of the remotely operated vehicle was highly successful in sampling “a vast array of specimens in a variety of terrain including sheer cliff faces at amazing depths in dives that lasted up to 14 hours”.

Dr Kostas Kiriakoulakis of Liverpool John Moores University, NUIG earth and ocean scientist Dr Martin White and his PhD student Annette Wilson conducted an extensive series of water measurements during the cruise as part of their research on the relationship between the ecosystems of the canyons and marine particles.

It is believed they may assist in understanding how the quantity and quality of available food impacts upon the creation of the underwater communities found in these canyons.

Marine organisms, including the bacteria in sediment, often produce complex chemicals, some of which could well be new to science, according to Dr Allcock.

“Biochemists and chemists will extract these chemicals and test them for antibacterial and other pharmaceutical properties, with the ultimate aim of synthesising useful new chemicals in the laboratory,” her team said.

The research survey was supported by the National Development Plan 2007-2013.

1 Chief medical officer urges people not to visit hardware stores
2 ‘When I look at the viral loads we find in elderly people, it is mind boggling’
3 Republic’s Coronavirus death toll rises by 28 as confirmed cases up by 500
4 Doctors sent to help at Cavan hospital after up to 70 staff infected with coronavirus
5 Coronavirus: Simon Harris expects restrictions to stay in place for weeks
Real news has value SUBSCRIBE