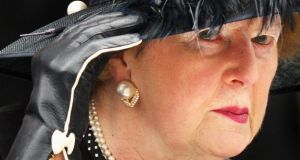 President Michael D Higgins has described Margaret Thatcher as one of the “most conviction-driven British prime ministers who drew on a scholarship that demanded markets without regulation”.

In a carefully worded statement President Higgins, who was a fierce critic of Mrs Thatcher's economic policies during the 1980s, said her place in history is secure because she was Britain's first female prime minister.

In his last Dáil speech in January 2011, the President criticised Michael McDowell’s contention that a degree of inequality was necessary for society.

He said that statement “ranks with the mad Margaret Thatcher view that there is no such thing as society. It stands there as such a notion. People should have seen immediately how incongruous it was to speak like this with the language of radical individualism.”

However, earlier today, President Higgins adopted a more cautious tone. He said: “Lady Thatcher's political career, its impact and legacy will be discussed and debated for many years. What is undeniable is that the strength of conviction in her beliefs was acknowledged by those who robustly opposed her, as well as by those who enthusiastically supported her.”

He praised her signing of the Anglo-Irish Agreement as a “valuable early contribution to the search for peace and political stability”.

He pointed out that Mrs Thatcher signed the Anglo-Irish Agreement in 1985 when violence was at its height in the north.

Fianna Fáil leader Micheal Martin said his party had “ little in common with the politics of Mrs Thatcher it would be wrong not to acknowledge that the long journey towards the peace and respect that we enjoy between Britain and Ireland today, took its first faltering steps in the bilateral discussions between Mrs Thatcher and former Taoiseach Charles Haughey. ”

However, he also criticised her “hard-line approach” at the start of her premiership. “Unfortunately her uncompromising approach to the escalating crisis in the early 1980s may actually have acted as a major boost for the recruitment efforts of the Provisional IRA at that time,” he said.

Former SDLP leader John Hume said Mrs Thatcher had displayed a “hardline, belligerent and uncompromising approach during the hunger strikes, but he then went on to praise her legacy in relation to the Anglo-Irish Agreement.

“With the help of American influence, she had the strength to withstand Unionist intransigence and sign up to the Anglo-Irish Agreement.

“This was a significant move and a key foundation stone in the beginning of our peace process which culminated in the signing of the Good Friday Agreement 15 years ago tomorrow.”

He said her handling of the hunger strikes was second only to General Sir John Maxwell's decision to execute the leaders of the 1916 Rising in stirring up nationalist sentiment.

However, he added that her decision to sign the Anglo-Irish Agreement, “probably against her better judgment” was worthy of praise.

“She stood firm with it and that was a positive. The Anglo-Irish Agreement was incorporated by consent into the Good Friday Agreement.

“Notwithstanding that, on balance, her style, if anything, delayed peace rather than brought it forward.”

Lord Bannside led fierce Unionist opposition to the Anglo-Irish Agreement. He acknowledged that he “condemned some of her actions in relation to this Province.

“Nevertheless, through good report and ill report, she listened to the views of the unionist people, and respected them. Our country has become much the poorer for the passing of Baroness Thatcher.

Northern Ireland First Minister Peter Robinson described Margaret Thatcher as a “transformative and powerful prime minister” who changed the face of the United Kingdom for ever.

Mr Robinson, whose was arrested for his opposition to the Anglo-Irish Agreement when he and others staged a border incursion in Co Monaghan in 1987, said Mrs Thatcher was committed to the union.

She had described the Anglo-Irish Agreement as “one of her greatest regrets”, Mr Robinson pointed out.

“Although relations were frosty at that time, I had a private social lunch with her in more recent years in much more convivial and positive circumstances,” he said.

"She was one of a kind: tough, possessed of a supreme intellect and driven by conviction. The entire country is indebted to her for all that she achieved. I know that her accomplishments will not soon be forgotten by a grateful nation.”

“She embraced censorship, collusion and the killing of citizens by covert operations, including the targeting of solicitors like Pat Finucane, alongside more open military operations and refused to recognise the rights of citizens to vote for parties of their choice.

“Her failed efforts to criminalise the republican struggle and the political prisoners is part of her legacy.

“It should be noted that in complete contradiction of her public posturing, she authorised a back channel of communications with the Sinn Féin leadership but failed to act on the logic of this”.

He added: “Northern Ireland has reason to be eternally grateful for her stance against terrorism, not least during the hunger-strikes when Northern Ireland was on the edge of something catastrophic.

“Whatever you thought of her as a politician she was a remarkable public servant who stood by her beliefs and courageously fought against the odds on the National, European and World stage.”

She had great difficulty in recognising that the Republic had to be part of the solution to the Northern Ireland problem. She effectively saw the Republic as a “colony” of the UK, he told RTÉ’s News at One programme.

He also said her handling of the hunger strikes was “hamfisted in a way that ultimately suited the way of the Republican movement” and she left behind a divided society both in Northern Ireland and in Britain.

Former Minister for Foreign Affairs Gerry Collins said Baroness Thatcher could “never understand or accept that we had a judicial system of our own” and she constantly complained about security co-operation.

Neither did she appreciate that Northern security cost the Irish taxpayers five times as much as did the British taxpayers, he said.

Former senior civil servant and Irish ambassador to Britain Noel Dorr said the former British Prime Minister was much more flexible that she appeared to be about the Northern Ireland situation.

“She wanted to settle the Northern Ireland conflict,”he said and she also had Irish roots despite her strident British background.

Programme for government must include 'fiscal responsibility' – Varadkar 22:05
MPs will no longer be able to vote without being present at Westminster 21:55
Dalkey street closed after hole appears following partial road collapse 21:24
Northern Assembly supports DUP motion on abortion 21:11
US takes aim at digital services taxes in EU 21:00