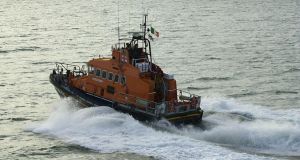 Five fishermen have been rescued this morning off the West Cork coast after their fishing vessel became stranded in strong Force 8 winds.

The Castletownbere trawler Anders Nees lost power when its propeller became fouled 6km south of Ardkinna Lighthouse on Bere Island at around 3.30am.

The RNLI Castletownbere Lifeboat Annette Hutton was launched and quickly located the stricken 24 metre trawler with her crew of five on board.

A tow line was attached and the lifeboat towed the Anders Nees, which only joined the local fleet last year, safely back to Castletownbere port.

Fall in mortgage drawdowns, Brexit threat to services, and advice on your pension and property taxes 06:41
Regionalisation may be the key as league adjusts to new reality 06:32
Amy Coney Barrett sworn-in as member of US Supreme Court 06:24
Drogheda in the driving seat as Division One reaches a thrilling finale 06:00
Damien Comer to miss another Connacht championship following hamstring injury 06:00