Farewell to Queen of Moore Street 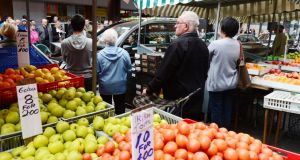 Stalls on Moore street come to a standstill as the funeral of Mary Kavanagh passed her empty stall. She was born on the street in 1921 and sold from her stall from the age of 7 until 3 years ago. Photograph: Alan Betson / THE IRISH TIMES 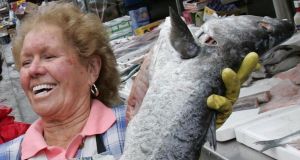 File pic of May Gorman, Moore Street trader who has died. She was known as the Queen of Moore Street. Photograph: Matt Kavanagh

Stall holders, council workers, butchers, bakers and mobile phone unlockers all turned out in Dublin today to bid farewell to the Queen of Moore Street.

Both sides of the capital’s best known market street were lined with mourners and business came to a halt as the hearse carrying the remains of May Kavanagh neé Gorman, known as May to her friends, passed slowly over the cobbles.

A floral tribute spelling out “May” with a sparkling tiara on its central letter sat on her empty fishmonger stall and as the hearse paused beside it, people threw long stemmed roses in yellow, red and white onto its roof and an uileann piper played “Molly Malone”.

The crowd gave a round of applause when the music had finished and shoppers on Henry Street parted as the hearse drove round the corner, out onto O’Connell Street and on to Glasnevin Cemetery.

Crowned Queen of Moore Street in 2005 by the late Tony Gregory, Mrs Kavanagh (92) was born on the street and spent her working life there until her retirement at the age of 88. She died at the Mater Hospital last Thursday morning.

Hundreds of mourners had gathered earlier at St Saviour’s Church, Dominick Street where Fr Derek Farrell, a family friend, told them the most important things in her life were “her family, her faith and her fish stall in her beloved Moore Street”.

He said she was a special part of the street, a great woman, a legend and an icon to traders.

He recalled an image of her “singing and dancing up through Moore Street, holding an eel from her stall as her dance partner”.

Fr Farrell, who officiated with St Saviour’s parish priest Fr Eddie Conway and former parish priest Fr Edward Foley, also told the congregation that Mrs Kavanagh had a hard life. She was predeceased by her husband Thomas, three daughters and a son, who died only three months ago. She had worked long hours for 60 years, rising at 4am to go to the wholesalers and opening her stall at 7am.

She would be missed by her three remaining children as well as by in-laws, grandchildren, great-grandchildren, relatives and friends.

Her motto, Fr Farrell said, was “it’s a good day when you can put your feet to the ground”.

She left many happy memories behind “as a gift to Dublin” he said, and highlighted the importance of Moore Street itself.

0:00 Pubs to stay closed and restrictions to remain on all gatherings, Cabinet decides

‘This was like a nuclear bomb’: More than 2,700 injured in Beirut explosion 00:04
Restrictions threaten 147 unbroken years of Irish athletics history 22:55
Deluge of appeals expected after predicted grades handed out in Scotland 22:48
Stirling and Balbirnie tee off to tee up another famous Ireland win over England 22:43
No fans at Indy 500 as Covid-19 cases surge in Indiana 22:10