Zoë Devlin: our unofficial ambassador for weeds, wasps and wagtails

The Irish botanist's love of observation has blossomed publicly only in retirement. Now, camera in hand, she is on a mission to record the island's plant life in all its glory 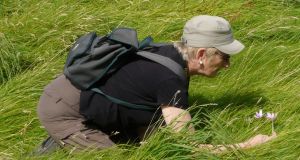 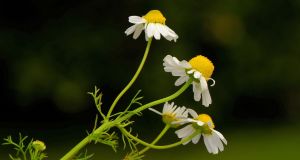 In one of her books, Zoë Devlin describes herself as a “garden escape”, a phrase that usually refers to exotic plant species that jump over garden walls and survive in the wild. Devlin was, in a sense, the reverse: The discovery of wild plants in her mother’s garden started her onto a lifetime journey into the natural world.

“As I child, I must have had a rebellious streak,” says the “unofficial ambassador for weeds, wasps and wagtails”. “I used to be sent out to pick peas for dinner, but I became fascinated by the little plants growing between the rows, and spent more time with them. There was chickweed, groundsel and forget-me-not. I couldn’t tell you which particular species – at that stage I didn’t know there were different species of these plants. I just knew their general common names.”

Devlin’s family seems to have supported her rebellion; at the age of eight she was given , a cherished miniature classic called The Observer’s Book of British Wild Flowers. Her passion for botanical observation – and later photography – grew. But it has blossomed publicly only in retirement (she admits to having he bus pass for quite a few years now) and driven a national mission: to encourage others to enjoy the detail of the vast patterns of wild plant life that spreads out, so often unnoticed, beneath our feet.

Devlin was last month honoured as Distinguished Recorder of the Year by the National Biodiversity Data Centre. She modestly dismisses her own tally as “only five or six hundred records”. She thinks she won the award more because her website, books, lectures and guided walks have prompted many others to assist the data centre in mapping our biodiversity.

She has certainly become one of the centre’s most effective advocates. On her wildflowersofireland.net website, the description of every species, no matter how humble, concludes with the words: “If you are satisfied you have correctly identified this plant, please submit your sighting to www.vascularplants.biodiversityireland.ie .” Her Facebook page regularly nudges her followers to look for some seasonal blossom, fruit or leaf – and log the results.

She describes herself as an amateur, but this is true only in the sense that she is manifestly driven by her love for plants, and never made her living from her studies. She is clearly as knowledgeable as many professional botanists. She is generous in helping people with identification, but properly rigorous in her scrutiny of their images and descriptions.

Devlin grew up in Dundrum, Co Dublin, “when it was all green fields and buttercups”, and was fortunate as a child in having relatives in three Wicklow valleys rich in flora: Avoca, Glendalough and Glenmalure.

She remembers one of them particularly warmly. Kathleen Lynn, a feminist and socialist who had been medical officer for the Citizen Army in 1916, owned the cottage that is now the Glenmalure Hostel. Lynn liked to sleep out on a deck under the stars. She sometimes brought convalescing slum children from her pioneering hospital, St Ultan’s, to benefit from the valley’s “fresh air, fresh water and fresh vegetables”.

One morning, Lynn showed young Zoë some heath spotted-orchids near the cottage. She encouraged her to use a hand lens to observe the complex detail of the flowers, and plunged her into a new and wondrous world: “There was so much beauty. It almost seemed wasted in a way, since the flowers were so tiny. After that, everything had to be looked at.”

She strongly recommends using hand lenses to bring the wonders of our wildflowers, often so very small, up close and personal for children. But she cautions against starting off with a powerful LED-lit lense; it can be hard to focus and only show a tiny detail at a time. Much better for beginners to use a simple lens, she advises, such as those available in Specsavers.

Her childhood delight did not become a profession, partly because she never saw university education as an option open to her. Kathleen Lynn’s vision for Irish women was very poorly realised, she notes, in independent Ireland.

Devlin worked as secretary (for a period in this parish) but continued to search out plants wherever she could find them. To this day, urban “waste” ground is one of her favourite habitats: “You never know what will turn up there.”

She married young, “the best thing that ever happened to me”. Her husband Pete shares her outdoor interests, though his passion is birds rather than plants. They bought a Renault 4L and took their two children on many camping holidays from one side of the country to the other, noting their observations on the margins of field guides and then, increasingly, on film. “I have about three tons of slides.”

A holiday home led to their intense involvement with the Wexford Naturalists’ Field Club. She notes happily that there are a number of farmers in the club, “committed to doing good things for conservation on their land”.

Digital photography enabled her to record and store plant finds much more easily, and then to communicate their fascination to the public. Her daughter Petra persuaded her that she had ample material for a website, which went live in 2009, designed by a field club colleague, Jimmy Goodwin.

The site became so popular that Con Collins of the Collins Press approached her to write her first book. Wildflowers of Ireland: A Personal Record (2011) is rich not only in lavish illustration and precise description in accessible style, but also in references to literature and folklore.

It was followed by A Field Guide (2014), unusual in two ways. The book organises plants by flower colour rather than scientific classification. Beginners will likely be very grateful for this. It shows only the plants that Devlin has photographed personally, though by now that includes almost any species that any nonspecialist is ever likely to find.

Future editions will have more species: “I’m continually on the lookout for new flowers,” she says. “It still gives me great joy and excitement to find them.”

Devlin is also on the lookout for new ways to communicate that joy and excitement. “Who knows,” she says with the enthusiasm of a teenager, “maybe next year there will be another way to spread the word.”

LETTING THE NATION KNOW WHAT YOU’VE SPOTTED
If you want to record your own nature records, whether of flowers, birds, or bumblebees, the National Biodiversity Data Centre has an app to help you. It’s not instantly user-friendly, but with practice it works well: biodiversityireland.ie/downloads/apps.

Centre director Liam Lysaght says that the recording process has two purposes: to engage the general public with nature in a new way, and provide a vast range of new data to be analysed by experts. “And all of this contributes directly to the protection of nature on the ground.”

Zoë Devlin herself is deeply committed to conservation, and expresses deep concern at current trends at home and abroad. “I’m not a pessimist by nature,” she says, “but things do look gloomy now.” Then she perks up: “We’ll just have to work very hard.”

If more people made contributions like Devlin’s, the picture would look a lot brighter.

1 Shops, hairdressers and hotels expected to reopen next week as Level 5 restrictions are eased
2 Almost 15% of Irish adults have been raped, study finds
3 Eir to issue apology for poor customer relations service
4 Miriam Lord: Unity and common purpose in spades but not for Covid fight
5 Joe Biden does not want to see guarded Border in Ireland after Brexit
Real news has value SUBSCRIBE