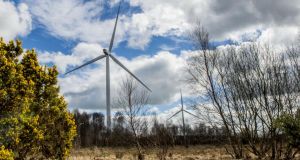 The wind energy industry is to hold a series of open days for the public this weekend to counter what they believe is damaging perceptions of wind turbines.

The annual Global Wind Day takes place on Sunday, and this year it will be marked by 13 wind farms across both parts of the island opening up to the public.

A walking and talking tour is being held today of the Greenoge Wind Farm in Co Carlow and tomorrow at Rahora Wind Farm in Tullogher, Co Kilkenny. Some 13 wind farms will be opened to the public between now and next weekend.

Irish Wind Energy Association (IWEA) chief executive Kenneth Matthews said the purpose of the open days is to show the public that wind is a clean source of power and not damaging to the environment.

He added: “The substantial environmental, economic and social benefits of wind energy, both locally and nationally, are clear. However, in order to achieve these collective benefits it is critical that the facts about the wind farms win out over some of the myths that have characterised recent debates on the issue.”

Mr Matthews described the open days as an “open invitation” to the public to come along and see how wind farms operate.

Controversies over the development of wind turbines has been accentuated by a proposal to build more than 2,000 across the midlands to provide export power for the UK.

However, that plan is now on hold as the UK Government has cooled on the deal.

For more information, as well as a list of participating wind farms and opening times, see www.iwea.com.