Will a swift response save the devil’s bird?

The common swift is struggling to survive. An Irish project hopes to help 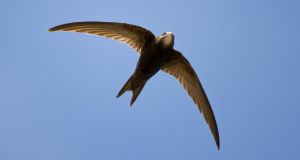 Swifts are a bit of a mystery. Many accounts of their behaviour are still prefaced by the phrase “very little is known . . .”.

These birds eat, mate and even sleep on the wing. We know a little more about the sleeping bit now, from some remarkable Swedish research. They climb to about 3,000m, then close down just enough of their brains to keep snoozing at the same altitude, free of predators.

They land – if that’s an appropriate word for their habit of shuffling around on their breasts in narrow crevices, as their feet can hardly support them – only to nest and to raise their young.

This aerial existence might make them seem very remote from humankind, and they had the medieval nickname of the devil’s bird.

Paradoxically, however, the common swift (Apus apus) has been intimately linked to the built environment for many centuries, if not millennia. Today this species seems, in many places, to be almost completely dependent on humans for its nesting habitat.

And because we now tend to construct sealed boxes to live and work in, with none of the nest-friendly nooks and crannies that characterised traditional stone and timber buildings, the common swift is thought to be in some trouble.

The swift’s relationship with our home places could be more common than we realise. Some species might be much more numerous in recent centuries than they were in a more natural landscape.

Rob Fuller, a leading British ornithologist, has described how his deep knowledge of bird habitat and breeding behaviour was turned upside when he entered Bialowieza primeval forest, in Poland.

This huge woodland is almost unique in Europe for its minimal, though still significant, exposure to human management and alteration. It has hardly any permanent constructions.

In its depths Fuller found familiar birds such as robins, blackbirds and wrens – as well as swifts – that nest in and around his suburban house in England. But they were often living in radically unfamiliar ways, in response to a very different environment and to different predators.

Nesting in crevices
Swifts were nesting in crevices in trees, something he had never seen in England. And they were more exposed in Poland, to more predators, than they were in their more “artificial” nest sites in the eaves of his home.

So Homo sapiens is not always the bad guy on the block in terms of the survival and expansion of other species, even of those we may think of as representing the essence of wildness.

Indeed, despite the swift’s association with the powers of darkness, even religious authorities often give it a helping hand. The 15th-century church in the Italian village of Vernazza, in the Cinque Terre, holds lots of the crevices that swifts favour for nesting.

But these holes are also big enough to accommodate larger and very common birds, such as starlings. The starlings would displace the swifts if some helpful person had not covered the crevices with wire netting. The mesh is too fine to admit a starling, but the cigar-shaped swift zaps through it effortlessly.

This is quite a common practice in old stone buildings across Europe. But swifts in Ireland and elsewhere are still thought to be losing out to the replacement of 18th- and 19th-century houses with modern constructions without any suitable nest sites.

Michael Viney drew attention to this problem on these pages in a column last summer. He mentioned the good work being done by Lynda Huxley at Galway-Mayo Institute of Technology in Castlebar. She has installed “swift bricks” along a modern roofline to offer the birds substitute accommodation. That project was inspired by the Northern Ireland Swift Group, which had pioneered a similar initiative at the Crescent Arts Centre in Belfast.

Helen Burke, a community officer with Dublin City Council, read Viney’s article and was inspired to act. She discussed it with Eric Dempsey, our national bird communicator par excellence, who was teaching in Ballyfermot and Chapelizod, and he took up the cause with enthusiasm. She invited him to address a meeting of “planners, architects and parks people” in the council’s Wood Quay offices, about the threat to swifts’ nesting habitat. “These are Dublin swifts,” Dempsey reminded them. “They have a Dublin passport. They are as much a part of our heritage as the Irish language or Christ Church.”

According to Burke’s account, the response was immediate. “Alan Hester, the buildings superintendent, spoke from the back of the room. He simply said, ‘We’ll put 10 nest boxes on the roof.’

“Now that’s the kind of thing you want to hear,” she says. “Music to our ears: no messing about, let’s get it done.”

Nest boxes
And so some nest boxes have been installed in the heart of the city, complete with recordings of swifts calling, to attract others. It is much too early to say whether they will be successful, although Burke is already planning further projects in Ballyfermot and Chapelizod.

Other voices on the council urge some caution. It’s good for birds to get a high profile on a landmark public building, but it’s not clear that sufficient research has been done to launch a full-scale swift-box project in Dublin.

Maryann Harris, the city’s energetic biodiversity officer, has not been involved in this project. “Dublin City Council is planning to assess the populations of swifts in Dublin in conjunction with Birdwatch Ireland. This will inform future measures for swift conservation, including planning controls, provision of nesting areas, understanding the connections between Dublin and the wider east-coast ranges and awareness-raising,” she says.

Getting the balance right between urgent action and well-informed research is notoriously difficult in conservation. In its efforts to assist the mysterious swift, hastening slowly would seem like a good course of action for the city council.