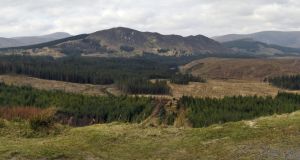 The Wild Nephin Wilderness Area project, in northwest Mayo, has been driven by the vision of Bill Murphy, head of recreation at Coillte, the semi-State company that manages the country’s forests. Its 11,000 hectares will include a swathe of neighbouring Ballycroy National Park, with the blessing of the National Parks & Wildlife Service, as well as 4,400 hectares of Coillte land.

A cynic might call it a clever way of getting rid of unproductive Coillte assets – this land was never one of the company’s commercial jewels – before the Government proceeds with its controversial proposal to sell off its harvesting right, at the behest of the troika.

But the project was born long before the financial crisis, and it illustrates another reason the Government proposal is so misguided: no buyer is likely to take the kind of deep interest in our national landscape that this scheme demonstrates.

The initiative is exciting and refreshing. Setting aside a vast area where people can “lose themselves” – that is, not find other people, or obvious signs of them – has a strong appeal in the context of the frenetic “development” of our rural landscapes in the boom.

The project can also claim a kind of retrospective salute for its location from Robert Lloyd Praeger, the godfather of Irish natural history. In 1937 he wrote: “Indeed the Nephin Beg range of mountains is, I think, the very loneliest place in this country, for the hills themselves are encircled by this vast area of trackless bog. I confess I find such a place not lonely or depressing but inspiriting.”

Attractive though it is, the concept of “wilderness” is problematic, both in general terms and in its application to Nephin Beg.

Plantations of lodgepole pines now dominate much of Coillte’s landholding. Tightly packed ranks of this alien tree have a generally negative impact on native biodiversity. There is a lot less “trackless bog” there today than Praeger remembered fondly. This industrial forestry takes the shine off any idea that Nephin Beg is a pristine landscape, somehow unsullied by human hands.

Murphy and his colleagues are well aware of the lodgepole issue, and of an even more serious one: an infestation of rhododendron threatens to reduce such biodiversity as the pine plantations permit. The plan is to eradicate the rhododendron – a mammoth task, as seen at Killarney and Glenveigh national parks. But the lodgepoles require a more pragmatic approach.

They will not be extracted, but they will be managed, even engineered, for at least 15 years, if not much longer. This will involve much thinning, as well as the artificial creation of old-growth fallen timber, which should give more habitat opportunities to native species.

It might be wise not to extract the lodgepoles en masse. Such operations, theoretically dedicated to improving native biodiversity, can in practice cause erosion and the acidification of entire watersheds. When we humans have made a mess, we need to be meticulous about how we clear it up.

But if you wanted to restore the landscape that so inspirited Praeger, you would have to get rid of the lodgepoles, though perhaps over a long term. However, says Murphy, “wild” is not equivalent to “natural”. For him, wilderness is more about the absence of people – except as visitors – than about restoring a native ecosystem. The project has three goals: wild landscape, primitive recreation and enhancement of biodiversity, and each will be given equal weight.

The aim of primitive recreation is to attract resourceful back-country hiking and camping, and perhaps hunting and fishing. Visitors will be on their own; roads and waymarks will be removed.

Everyone who wanders there should have plenty of time to ponder the bigger question that underlies the whole project: what do we mean by “wilderness”, in a period when human impacts can be detected on every inch of the planet? And this is not as new a phenomenon as we often think.

As Michael Viney pointed out recently on these pages, 19th-century Mayo was no ecological paradise. Today’s wilderness may often turn out to be yesterday’s congested district, its emptiness an echo of the terrible human cost of that congestion.

The notion of wilderness is full of paradoxes, but there is much to be learned from them. For example, the strange fact that, in an overpopulated world, the only way we can maintain the “wildness” in a landscape is to manage it, in one sense or another, forever.


Paddy Woodworth’s book, Our Once and Future Planet: Restoring the World in the Climate Change Century , will be published by University of Chicago Press in October.