Why we still need Europe to stand guard over Irish nature

The European Commission is running a ‘fitness check’ on the EU birds and habitats directives. Scaling back these conservation rules would undermine years of progress 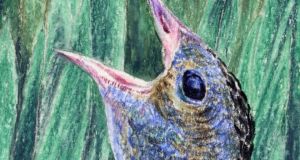 Corncrake calling: without the EU standing watch, would we really have paid farmers to mow their meadows in ways that let corncrakes escape? Illustration: Michael Viney

The crisp and juicy greens of spring sing out from every hedgerow. New, velvety stretches smooth the smallest roads along the Wild Atlantic Way, and closely barbered waysides clear the view around every corner. Ireland this May has never looked greener – never sounded greener, indeed, with the launch, at last, of a national landscape policy and thousands of small farmers rushing to sign up to Glas, the Green, Low-carbon, Agri-environment Scheme.

No wonder that Chinese bigwigs were impressed with healthy grass-fed beef or that Americans now look forward to Irish steaks free of hormones. As the national herd starts chewing to the very margins of Ireland’s grassland, “green” and “smart” have come to seem synonymous at last – at least in Government language.

So why should anyone worry when the European Commission announces a “fitness check” on the EU birds and habitats directives – the cornerstones of nature legislation – as part of a “smart regulation policy”?

This process, as the commission explains, uses “evidence-based critical analysis” to test directives for continuing relevance and reasonable cost. “Is EU action still necessary?” it asks, and wonders – here’s the worrying bit – “Can or could similar changes have been achieved at national/regional level or did EU action provide clear added value?”

The questions are among those offered for public response over the next two months, but they have already sent the conservation NGOs of these islands into a panic.

In Britain 100 conservation groups have described the review as the single biggest threat to biodiversity in a generation. In Ireland An Taisce echoes their language: the commission, it warns, “is considering undermining these laws, undoing years of progress”.

The commission would deny, I’m sure, wanting to do anything of the sort. It points out that it has already completed “fitness checks” of legislation relating to waste and freshwater – it just happens to be the turn of nature conservation.

The anxieties in Britain are understandable, with real prospects of withdrawal from the EU or, at the least, a “bringing home” to Westminster control of non-trade issues, nature conservation quite possibly among them. EU nature directives have been shaped by independent advice from scientists in each member state, a process immune from pressure groups among landowners, agribusiness and developers. They have protected more than 1,000 animal and plant species in a network of “Natura” habitats – some 27,000 of them in wetlands, moorlands, woodlands, seashores and so on, and even in the deep ocean.

The British NGOs can at least count on the UK’s long-standing popular tradition of concern for nature and its wildlife. In Ireland’s farming culture this was very slow to begin. Governments waited for external prompts in the late 20th century, starting with UN advice and money for An Foras Forbartha in the early 1960s – an initiative closed off by politicians.

Without EU membership, its regional funds and conservation directives, without nature films on television, without the growing global concern for the environment, the drive of Irish NGOs and the initiatives of many young schoolteachers would have found far less to build on. Our home-grown ecological expertise is, however, now second to none, its research often helped by EU funding.

But the co-operation of the landowning world is still, at best, equivocal, and conservation of threatened species can still raise a sneer in the Dáil. Without the EU standing watch would we really have paid western farmers to mow their meadows in ways that let corncrakes escape or paid farmers in Kerry to dig ponds on their land for natterjack toads to breed in? Would Donald Trump’s golf- course expansion in the dunes of Co Clare have been checked for the sake of a snail you can hardly see?

In the years since the habitats directive was born the EU enlargement to 27 countries has enormously extended and refined its range of protection, adding, at various times, Moesian silver lime woods in the Balkans, Iberian gypsum steppes and Baltic esker islands to the habitat types.

In something so complex and long-established there is bound to be room for review. Climate change and ideas of habitats and wildlife as “natural capital” could introduce fresh priorities, but the basics are still sound and successful, and the first is that the scientific independence and enforcement of the directives, from general experience, should not be surrendered to national control.

An Taisce offers answers to the commission’s questions at antaisce.org/naturealert – or you can speak for yourself at tinyurl.com/p7ve2ql.