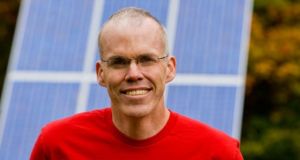 Bill McKibben had the first hybrid electric car in Vermont. His home in the countryside of the American state is covered in solar panels, and has all the “right” lights, but, he says, “I don’t try to fool myself that’s how we’ll solve climate change.”

Described by Time magazine as the planet’s best green journalist, and by the Boston Globe as the United States’ most distinguished environmentalist, McKibben will make his first visit to Ireland next week, to speak at Meeting the Challenge of Climate Justice: From Evidence to Action, a conference at Maynooth University on June 22nd and 23rd.

As the founder of 350.org, the only global group that works only on climate change, McKibben says that the most important thing people can do is join together with others to fight against large fossil-fuel infrastructure projects and encourage investors to stop giving money to the fossil-fuel industry.

“Civil disobedience underlines the moral urgency of things,” McKibben says, mentioning large campaigns against the Keystone XL oil pipeline, from Alberta, in Canada, to the US gulf states, and an enormous new coal mine in the Australian state of Queensland.

The movement 350.org has organised more than 20,000 rallies in almost every country in the world since it was founded, in 2008. Its name comes from the 350 parts per million that scientists defined as the safe upper limit of carbon dioxide in the atmosphere. Other rallying calls coined by the group include “fossil freeze”, “keep it in the ground” and “solar thaw”.

McKibben says: “For a very long time the environment movement focused on personal responsibility, but climate change is a structural, systemic problem rooted in the power of the fossil-fuel industry, which has been able to avoid paying for the damage it causes the planet.”

Many large coal, oil and gas companies forecast that the world will stick with fossil fuels for decades to come, so they won’t go down without a fight. McKibben says he featured as a laughable threat in one fossil-fuel industry campaigns. It was, he explains, “a minute-long cartoon about a boy whose girlfriend was a barrel of oil until his enviro friends convinced him to break up with her – at which point he could no longer use his cellphone or eat food or do much of anything else. The cartoon features my floating, disembodied head as a leering demon.”

McKibben is used to being in the public eye. He is the author of more than 20 books, including The End of Nature, from 1989, one of the first books on climate change for a general audience, and Eaarth: Making a Life on a Tough New Planet (2010). In Eaarth – the extra A is meant to indicate a changed planet – McKibben says we need to acknowledge that we’ve waited too long and that enormous change is not only unavoidable but already under way.

He does, however, see change in sight and believes people are more tuned in to the issues than they used to be. “The very rapid drop in price of solar panels makes a low-carbon world seem possible,” he says. “The question is how fast. If it’s at the speed of the Germans” – who can get 80 per cent of their electricity from solar power in the summer months – “or Danes” – who get 40 per cent of their electricity from wind energy – “we have a chance.”

As for the transition to a low-carbon society, McKibben believes this would be a lot less disruptive than the current level of floods, droughts and other climate-change events around the world. A grudging optimist, he also suggests that a low-carbon society would be more community-orientated and less individualistic.

“A world that runs on sun and wind is more local and connected,” he says. “This energy world will be a lot like the internet, where everybody is putting in and taking out things. It will be a big, expensive, complicated transition to renewable energy, but not as complicated as a world that is three or four degrees warmer . . . The shifts in climate will disrupt lives in a profound and unmanageable scale.”

Next week’s conference at Maynooth University, which has been organised by Trócaire (climatejustice2015.org), brings together experts on climate science, climate justice and climate activism.

These include the former president, and climate-justice campaigner, Mary Robinson, Prof Jean-Pascal van Ypersele of the Intergovernmental Panel on Climate Change, and Theotonius Gomes, auxiliary bishop of Dhaka, in Bangladesh. Flat and low-lying, with a high population density and poor infrastructure, Bangladesh is one of the countries most vulnerable to natural disasters.

McKibben says the crucial questions at the Paris climate-change talks in December will be about finance for the developing world. “For both moral and practical reasons it’s necessary for the north to finance the energy transition in the south,” he says, adding that the pope’s recent encyclical is a sign that climate change is now the central global issue.