Welcome respite as weather set to improve over Easter holiday 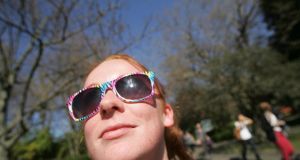 A bit of Irish sun in March is not unheard of, as this shot from March 2012 in Dublin’s St Stephen’s Green shows. Although extreme lows were rare this March it was a cold month, with most stations recording below-average air temperatures. File photograph: Bryan O’Brien/The Irish Times

Met Éireann is predicting a timely turnaround over the Easter weekend as rain and chilly conditions make way for more pleasant weather nationwide.

Following a fairly tempestuous period of late, forecasts indicate that temperatures could reach 15 degrees over the holiday weekend on Saturday, Sunday and Monday.

However, overcast conditions, especially in coastal areas, mean prospective seaside revellers may be left out in the cold.

“The cloud question is the big question for the whole of the Easter weekend. It will start off very cloudy on Friday, and as those showers disappear a clearing will come and there’ll be a few more brighter spells,” Met Éireann’s Willemien Phelan said.

“The rain on Friday will be last of the rain for a while, so it’s a good news story in that it is a lot drier and more settled, and winds will ease as well.

“Temperatures will then increase, and where it’s sunny it could even reach 15 degrees - but where it stays cloudy it could be just 12, which isn’t really an improvement.

“On the coast there could be in-shore winds bringing more cloud in, and that could make it quite a dull day. So when people think it’s very bright inland, it might be one of those holiday weekends when you’re disappointed on the coast,” Ms Phelan added.

Scatterings of cloud are liable to effect all areas, which will cause a variation in temperatures up to Tuesday, she continued.

The outlook heralds a temporary respite from the changeable weather of recent days, as April began in much the same vein as the preceding month.

Overall, March proved to be cool and windy for northern and western areas, with a large disparity in conditions witnessed across the country according to Met Éireann’s monthly weather report.

Although extreme lows were rare it was a cold month, with most stations recording below-average air temperatures.

St Patrick’s Day was one of the warmest days in many places, along with the 19th and 28th.

The highest temperature seen in March was on the 7th at the Phoenix Park, when the thermometer tipped on 15 degrees.

Just a few miles away, Dublin Airport recorded its sunniest March days in 34 years on the 21st and 22nd, when there was practically unbroken sunshine.

On the other side of the country the same couldn’t be said for Knock Airport, which saw practically no sunshine for a total of 11 days.

Claremorris in Co Mayo had its wettest March since 1994, as did Athenry, while over 2.5cm of rain fell at Valentia Observatory in Kerry on the 25th.