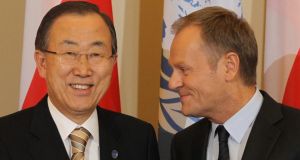 The outcome of the UN’s 19th climate change conference was thrown into doubt yesterday after developing countries staged a “walk-out” at 4am and Polish environment minister Marcin Korolec – the conference president – was dismissed in a cabinet reshuffle.

Although assurances were given that he would remain in charge of steering the difficult round of talks, environmentalists said the stated reason for his removal by prime minister Donald Tusk – to accelerate shale gas operations – showed that Poland was “not serious” about global warming.

“This is nuts – changing the minister leading the climate negotiations after a race to the bottom by parties to the [UN] Convention [on Climate Change] shows prime minister Tusk is not sincere about the need for an ambitious climate deal,” said Maciej Muskat, director of Greenpeace Poland.

Juan Hoffmeister, Bolivian co-ordinator of the G77 group of more than 130 developing countries, said they were walking out of the late-night talks on climate finance after Australia and other developed countries blocked progress on the issue of “loss and damage” from climate change.

‘Bad behaviour’
There has been widespread condemnation of the “bad behaviour” of Australian delegates, whose new government is planning to dismantle plans for carbon trading. “They turned up in T-shirts and gorged on snacks [during the meeting],” according to Ria Voorhaar, of the Climate Action Network.

Oxfam’s Tim Gore said the decision to walk out of the talks on compensation for loss and damage “highlights the level of exasperation there is with rich countries at these talks – particularly the Australian delegation . . . The question now is how ministers will stop the rot spreading elsewhere.”

“Ad hoc announcements by only a few countries . . . is a betrayal of what they said they would do. If they won’t honour their word on climate finance why should they be trusted on any other issue?” he asked.

But Todd Stern, the US climate envoy, took a more conciliatory line on “loss and damage” at a four-hour ministerial roundtable on climate finance yesterday. Previously, he had appeared to dismiss the concept, on the basis that developed countries were not liable to pay compensation.

US ‘shifts position’
British energy secretary Ed Davey said the US had “shifted its position” on climate change and president Barack Obama and secretary of state John Kerry were now “showing global leadership” on the issue. “That couldn’t be said of an American president before and it’s very, very positive.”

Mr Davey also announced that Britain would join the US in ending support for new coal-fired power stations anywhere in the world, other than in “rare” circumstances.

Asked about the danger of delegates leaving Warsaw this weekend “with less than they came with”, he said it was “never on the cards” that the conference would produce a “dramatic breakthrough” but rather that it might lay the groundwork for a global agreement by the end of 2015.

European Climate Action Commissioner Connie Hedegaard expressed concern that countries were “backtracking” from commitments made at the Durban climate conference in 2011. “By that, we are wasting precious time. So no more backtracking. The challenge is too urgent for that.”

UN secretary general Ban Ki-moon, who reminded delegates of their “momentous responsibility” to address climate change, is convening a summit on the issue in New York next September, to lay “firm foundations” for the crucial Paris conference in 2015.