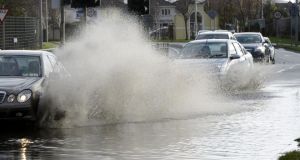 ‘Most of our current sense that climate change may pose an imminent existential threat derives from climate model projections.’ Photograph: Alan Betson

This week’s launch of the energy policy Green Paper and the recent publication of the Government’s heads of the Climate Action and Low Carbon Development Bill has brought the issue of climate action to the forefront of public attention.

As a food exporting country, with consequently large agricultural emissions by EU standards, Ireland will face a particular challenge in meeting these targets. For both climate change and energy security reasons we must play our part in the moving towards a low-carbon world. However, balance requires that our unique national circumstances also be taken into account. Otherwise, Ireland could pay a totally disproportionate price in complying with EU emissions policy.

The EU targets are to a considerable degree an outcome of the climate change warnings issued by the Intergovernmental Panel on Climate Change (IPCC) in its successive reports dating from 1990, including its recent Fifth Assessment Report, comprising three volumes. Given their influence, it is vital that these reports be completely objective.

I wish to make some observations both on the current IPCC reports and on Ireland’s particular situation in relation to climate action. Some commentators have interpreted the current IPCC reports as indicating that the world is facing a planetary emergency of such immediacy that all conceivable actions on emissions reductions, regardless of cost, must be taken. In fact, the overall IPCC message is much more measured than that.

A close reading of the reports shows, in particular, that there is a considerable difference between the relatively cautious stance of IPCC Working Group I, whose report “Climate Change 2013: The Physical Science Basis” was issued last September and the much more alarmist stance of IPCC Working Group II, whose report “Climate Change 2014: Impacts, Adaptation and Vulnerability” was issued in March. The scientific communities producing these reports overlap only to a limited extent; the participants in the first working group are overwhelmingly physical climate scientists while, for the most part, those involved in the second working group are researchers whose expertise lies not in the basic science of climate change but in its societal implications.

The defining statement of the first working group is: “It is extremely likely that more than half of the observed increase in global average surface temperature from 1951 to 2010 was caused by the anthropogenic increase in greenhouse gas concentrations and other anthropogenic forcings.” The report points out that the atmospheric carbon dioxide concentration has now risen to 40 per cent above preindustrial levels, that the global average temperature has increased by about 0.8 degrees over the past century and that sea level is rising at 3.2mm per year.

Most of our current sense that climate change may pose an imminent existential threat derives from climate model projections. The majority of the current models project global temperature increases of several degrees Celsius by the end of this century if emissions continue unabated. The report of the first working group acknowledges, however, that the great majority of the models have failed to replicate the current warming hiatus; instead, these models have indicated substantial warming over the recent 15-year period when the observed temperature has shown little increase. This discrepancy is discussed in detail in the interior chapters of the report.

No completely confident explanation of either the warming hiatus or the models’ failure to replicate it is at present available. Consequently, the report of the first working group acknowledges that the model projections for the future are subject to significant caveats.

The second working group’s report conveys no corresponding sense of caution. The most pessimistic climate model projections are taken as if they were completely reliable and are applied to deriving the most alarming impacts in various sectors. Extreme weather events are attributed to man-made emissions in a way that the first working group does not endorse. “Multiple tipping points” – a concept that is not endorsed by the report of the first working group even under the most pessimistic of model projections for the 21st century – are freely referred to.

Coming to the Irish situation, our agricultural sector accounts for 30 per cent of our total emissions, a percentage that is three times the EU average. Our agricultural experts, however, have demonstrated that this large percentage does not reflect any inefficiency in our modes of production. On the contrary, per unit of output, the Irish meat and dairy sectors have very low carbon footprints by international standards. The large percentage figure arises because of the large relative size of our agricultural sector, with most of its output being exported.

Any curtailing of Irish food output would only result in the production moving to locations that are less carbon efficient, with a consequent increase in global emissions. To get the balance right on climate action, all the above factors deserve to be taken into consideration. The IPCC first working group report, with due attention paid to its detailed interior chapters, should be the primary scientific source guiding the assessment of climate risk. The over-alarmist stance of the second working group’s report should not induce the public or our legislators into supporting blanket policy options affecting agriculture that serve neither the interests of this country nor those of the wider world.