Warning of floods and food shortages in Ireland 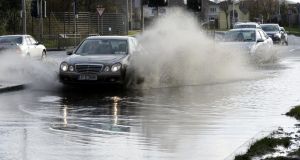 ‘Without adaptation measures such as flood defences and early warning systems to prepare for disasters, the impacts of climate change are likely to be felt more strongly in future – particularly if no brakes are applied to year-on-year record greenhouse gas emissions.’ Photograph: Alan Betson

Ireland is likely to face more extreme weather events such as the recent flooding and storm surges, increased water restrictions and shortages of animal fodder and even food due to drought as the impacts of global warming become more severe.

That’s what some of our experts have deduced from the latest report by the UN’s Intergovernmental Panel on Climate Change (IPCC), released last Monday, which said that the impacts of global warming were already being felt “on all continents and across the oceans”.

It found that the “observed impacts” were substantial and widespread, that some future risks would have “large or irreversible” consequences for different sectors and regions, and that a risk-management approach to these threats should support adaptation and mitigation efforts.

Without adaptation measures such as flood defences and early warning systems to prepare for disasters, the impacts of climate change are likely to be felt more strongly in future – particularly if no brakes are applied to year-on-year record greenhouse gas emissions.

Any plus in terms of warmer summers throughout western Europe would be offset by losses due to “extreme precipitation”, flooding in river basins and on coasts, sea level rise, drought-related water shortages and “extreme heat events affecting crop production”.

Food security has emerged as a major issue because of the IPCC report’s finding that unmitigated global warming is likely to cut agricultural production by 2 per cent per decade, even as demand rises by 14 per cent per decade to feed a rapidly growing population.

Next step for Irish climate change specialists is to examine the modelling done for the IPCC’s Fifth Assessment Report and apply it to Ireland.

“This will enable more detailed analysis of the local changes and allow us to do better impacts analysis,” says Dr Margaret Desmond.

Dr Desmond, climate change research specialist at the Environmental Protection Agency, says current projections of the impacts of global warming were similar to what’s outlined in the IPCC report “although the variability here is much greater than other parts of the world”.

Coastal flooding
Ireland, with its Atlantic weather system, is vulnerable to extreme events such as the recent exceptionally heavy rainfall and coastal flooding.

Prof Sweeney, who heads the Irish climate analysis and research unit at NUI Maynooth, says the likelihood of more extreme weather events “is corroborated from the report” of the IPCC, which explicitly links such events with increasing temperatures.

Yet emissions from Irish agriculture will increase. “Arguing that Food Harvest 2020 is addressing the issue of food security would seem untenable. How does a 50 per cent increase in dairy output, with no assessment of emissions increases associated with it, square up?”

Referring to the IPCC’s finding that fish species are likely to move as oceans warm up, Prof Sweeney queried whether salmon farming would be viable in warmer and stormier offshore waters.

“The IPCC report, by implication, demonstrates the futility of a target-less Climate Bill, which buys time more than reduces emissions and indicates a lack of urgency that is worrying,” he says.

“Is it time to take emission management out of the political system, as in the UK?”

As for adaptation, the costs are “difficult to quantify”, Dr Desmond said. The “clear message” was that these costs could be very high, even for lower levels of warming, and that inaction on climate change carried “huge risks and potential costs threatening future prosperity”.

Yet the National Adaptation Plan
issued last December is “extremely skeletal in its content”, according to Prof Sweeney. As the Irish Environment newsletter noted, it “says almost nothing concrete [and] fails to advance any commitment to what specifically has to
be done”.

Dr Desmond says the proposed Climate Bill should “adequately account for the observed and projected impacts of climate change and develop an approach to reducing and managing associated risks . . . driven by a national plan which sets out a clear vision for Ireland”.

This would involve quantifying the risks of climate change, assigning responsibilities to deal with them and having a “coherent system of governance”, ‘she suggests.

At the very least, there must be an independent expert advisory panel, as environmentalists have argued.

Switching to renewable energy for electricity production is not without its problems, as the grassroots opposition to huge wind turbines shows.

Neither would it be easy to convert the ESB’s coal-fired power station at Moneypoint to run on a cleaner fuel, such as gas or biomass. We’ve also locked ourselves into long-term car dependency because so many people live so far away from where they work. This is as a result of the liberal planning regime during the boom years under which nearly every county in Leinster set out to capture a share of Dublin’s growth.


Lack of commitment
But perhaps the biggest problem is a lack of strong conviction and political commitment to advance the agenda. Even Minister for the Environment Phil Hogan wobbled recently when he queried “whether we have scientific evidence or not in relation to climate change”.

In “welcoming” the IPCC’s latest report, he described it as “a vital piece of scientific policy analysis to inform our response at all levels of governance” and said Ireland “remains engaged and committed, both domestically and internationally, to advance this work”.

We shall see how far the Minister has travelled when new draft heads of the long-delayed Climate Action and Low-Carbon Development Bill are published “in the coming weeks”.