Views sought on adding chemical to water to combat lead 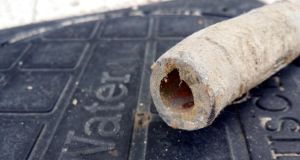 Lead piping excavated from the driveway of a home in Sandymount, Dublin. The HSE has said health risks from lead are greatest for infants, especially those being bottle-fed, young children and babies in the womb. Photograph: Frank Miller

Irish Water’s proposals to add a chemical to the water supply nationally in an effort to lower lead levels to a safe limit will be open for public consultation by the end of the year.

However, it will introduce orthophosphate into Limerick city’s water supply as a pilot project in September. Irish Water estimates more than 200,000 homes in the State may have lead plumbing.

Jerry Grant, head of asset strategy for Irish Water, said orthophosphate was found to be effective in putting a coating inside lead pipes and reducing the lead levels in water – but not eliminating it.

Mr Grant said phosphorus did not have a health disadvantage but the downside was to the water environment.

“It’s a commonly used food grade chemical that’s used in the beverage industry,” he said. “But if phosphorus goes above a certain threshold [in the environment] it can cause algae blooms, which can have a big impact on water quality and fish and so on.”

Mr Grant said adding the chemical would be an interim solution while the lead pipes were replaced. “We have to accept it’s going to take a couple of decades at least . . . a generation to get the lead out of the system.”

Irish Water estimated it would cost €45 million to set up the treatment and €5 million a year to maintain it. Mr Grant said a reason Limerick was chosen as the test project, which costs about €100,000 to install, was because it had at least 4,000 homes with lead service pipes.

“We’ve had some very high levels in parts of Limerick . . . and that’s because the sewage from Limerick, the waste water, goes into the Shannon estuary, the phosphorus is not a critical issue.”