Urban beach gets go ahead in Dún Laoghaire

The €2.5 million project will include a heated, sea water swimming pool 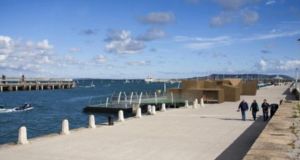 Computer-generated view of the “urban beach” in Dún Laoghaire

Almost a year after the plan was lodged by Dún Laoghaire Harbour Company, Dún Laoghaire-Rathdown County Council approved it for development.

The council and the harbour company are to jointly fund the project. It includes an artificial beach and cafe as well as a floating swimming pool with heated, treated seawater built on a converted river barge located beside a berth within the harbour.

The beach will be overlaid on the existing concrete structure of berth 1 at the East Pier in the harbour. Planned facilities alongside the beach include changing rooms, toilets and showers contained in eight single-storey “architectural modular pod structures”.

The development will operate for six months a year.

Councillors approved funding of up to 50 per cent of the project’s cost in 2013.

An entrance fee will be charged, likely to be equivalent to the price of a cinema ticket. Once it is operational, the harbour company says it will attract up to 150,000 visitors and generate up to €1 million annually.

If the facility ceases to operate for a year, all of the structures are to be removed and the pier is to be restored.

Some 21 submissions were received by the council when the project went out to public consultation, with 15 objecting to it. Concerns include that the East Pier, a protected structure, would be damaged by the development.

Community groups said the money should be used to redevelop the nearby derelict Dún Laoghaire baths.