Anne McGowan with her son Patrick, as Letterkenny is the overall tidy towns winner during presentation of prizes in The Helix, Dublin. Photograph: Dara Mac Dónaill / The Irish Times

It beat 860 villages and towns across the State to become the eighth town in Donegal to win the award since the competition began in 1958. Letterkenny was also named as Ireland’s tidiest large urban centre.

Several thousand people from Tidy Towns teams across the State gathered in the Helix at Dublin City University today to hear Minister for the Environment Alan Kelly announce the winners. Mr Kelly said the win for Letterkenny was “a fantastic achievement” and he described the town as “a really worthy winner”. 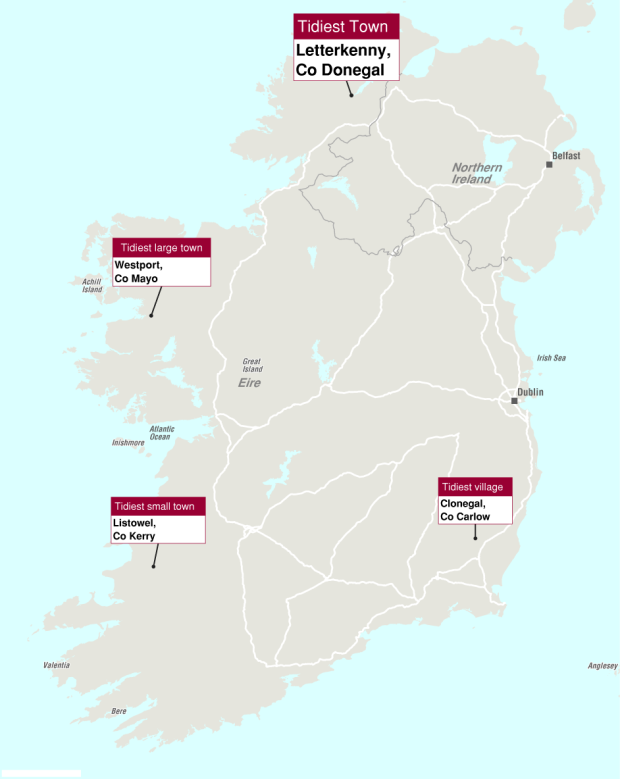 This year two new awards were introduced, the Diversity Award and the Youth Award.

Supervalu managing director Martin Kelleher said the addition of the accolades was a “real endorsement of the competition and its capacity to grow, attracting all age groups and embracing all cultures within our communities”.

“The incredible dedication shown by the volunteers involved is truly admirable and continues to amaze us year after year. Their relentless commitment to working for the good of their local community is what makes this competition the success it is today” he added.

The national Tidy Towns initiative was launched by Bord Fáilte, now Fáilte Ireland), as part of the ‘Tostal’, a nationwide festival celebrating all things Irish in 1958. It was a step-up from the original National Spring Clean Campaign which ran between 1953 and 1957. The Tidy Towns is Ireland’s best known environmental initiative.

Initially perceived as a litter-picking initiative, the competition now awards marks in a range of categories including the use and development of natural amenities, waste and reduction and landscaping.

Climate conference to highlight challenge of turning pledges into action

3:31 Stamp duty increase for bulk-buyers of houses set to be approved by Dáil

1 Mother tried to sedate three children on night before she killed them, court told

4 Mother accused of murdering three children was convinced she was ‘broken’, court hears

Lockdown easing: Charity shops reopen offering more than mere bargains 01:34
State spending on cybersecurity criticised as ‘paltry’ 01:00
HSE IT system will take ‘several weeks’ to get back up and running – Donnelly 01:00
Family court: woman claims partner threatened to ‘cut her up’ 01:00
Restoration of health service computer systems to take ‘many weeks’ in wake of cyberattack 00:15