Thousands of people took to the streets of Dublin in an anti-water charges demonstration in Dublin city centre on Saturday. There was a strong pro Greek element to the protest showing solidarity with their european neighbours debt negotiations. 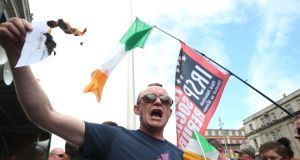 A protester burns a water bill on O’Connell Street, Dublin, during a demonstration against water charges on Saturday. Photograph: Brian Lawless/PA 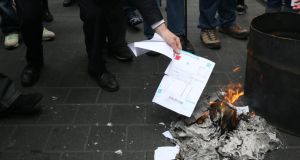 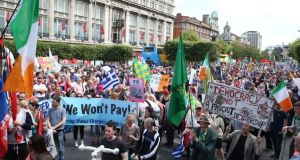 Demonstrators burned Irish Water bills outside the GPO on O’Connell Street today as thousands turned out in Dublin city centre to protest against domestic water charges.

Following separate processions from Connolly and Heuston railway stations earlier in the afternoon, about 5,000 people converged on the capital’s main thoroughfare to voice dissatisfaction at the billing process which would see householders pay for their water use.

A minimal security presence was in evidence for what was a peaceful and colourful event on a sunny day in Dublin.

Some of those present elected to don fancy dress outfits, while many others brandished signs criticising Government parties, while dozens of Greek flags were flown in recognition of the ongoing bailout talks involving the debt-ridden Mediterranean nation.

Traffic restrictions were in place along the quays, around College Green and on O’Connell Street itself, where north and south bound traffic was temporarily curtailed as the marches merged in front of a flatbed truck parked on the pavement beside the GPO.

Before any of the speakers began their addresses, bills were already being burned sporadically among the crowd. A number of oil drums were eventually placed at various intervals, and were soon filled with the ashes of hundreds of letters as those intending to actively resist the new charges consigned their own bills to the flames.

In her opening speech, Independent TD Catherine Murphy equated the way the Government’ released payment figures for water bills to the manner used to try and prevent her from obtaining sensitive documents carrying details of the sale of Siteserv to Denis O’Brien’s Millington group in 2012.

“Just as I found it difficult to get answers last year on the Siteserv issue, others have asked questions about how many people have paid to date. And you know what, you can’t get it on Freedom of Information, it has to be appealed. If 80 per cent of people had paid, they’d be rushing out to tell you.

“You’re intelligent people , you make up your own mind about that. I believe in conserving water, I believe we need to fix the pipes, but I also believe that Irish Water’s days are numbered,” she announced.

Afterwards, the Kildare deputy said that although she doesn’t actively condone the burning of bills, she does sympathise with people’s anger on the issue.

“I wouldn’t be burning my bill, I’d like to hold onto the evidence for the future… I think people are expressing it in a different way, I can’t tell you the number of people who have told me that they’re not paying but they’re not necessarily here today,” she added.

As opposed to some previous, larger demonstrations which saw isolated scenes of confrontation and occasional skirmishes between protestors and gardaí, a convivial atmosphere was evident throughout today’s rally.

“There’s a good few thousand here, obviously there were bigger ones where we had 100,000 but the campaigns are still there locally, people are still not paying. There’s still dozens of independent groups around the country fighting and sticking to their guns about it,” said campaign organiser Ciarán Heaphey.

He says he remains unperturbed by the potential repercussions of non-payment which will include further fines on top of monies already owned, according to Irish Water representatives.

“I’m not afraid. I would never pay for water, this is the third time we’ve been asked to pay for water through various means- we’re not paying for water again.”