About 5,000 people march through Dublin to pressure leaders ahead of COP21 summit 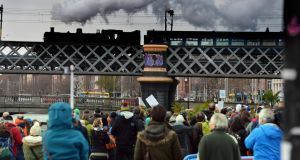 Protesters watch during the climate change march in Dublin as a steam train hoots its way across the Liffey on Sunday. Photograph: Cyril Byrne/The Irish Times

About 5,000 people marched in a good-natured but determined fashion through Dublin on Sunday in a bid to put pressure on the Government and world leaders ahead of the COP21 climate change summit in Paris.

Hundreds of people joined other marches in Belfast, Cork and Galway as part of a global day of action.

The Dublin march was organised by Stop Climate Chaos - a coalition of 28 organisations including Friends of the Earth, Oxfam and Trócaire - and the crowds braved some harsh and stormy conditions to make their presence felt as they made their way from Custom House Quay to Dáil Éireann.

The march was led by a dozen or so members of the Dublin Cycling Campaign. Just before it got under way, a coal-burning steam train thundered over the protesters on the Loop Line Bridge - to hoots of derision from the crowd.

“I’m here for my little boy,” said broadcaster Jonathan McCrea, nodding in the direction of his four-year-old son sitting on a bench waiting for the march to start.

“I turn 40 next year and when he turns 40 the world will be a much different place. There is very little I can do. I feel useless - but at least by marching we can show our Government this is an issue we care about.”

Green Party leader Eamon Ryan said climate change was an issue the Government “doesn’t care about” . He accused the Coalition of “shaming our country” and paying lip service to the will of the people who want real action to be taken to curb emissions.

“I think there will be a deal in Paris,” he said. “Everyone is moving in the right direction in lowering their emissions, except us. Ours are actually increasing. We are becoming a pariah in Europe. ”

Friends of the Earth director Oisin Coghlan was similarly scathing of the official response to the climate change crisis, but not as upbeat as Mr Ryan about the prospects of a deal being struck in Paris.

He said people had come onto the streets of cities all over the world because they “no longer trust our leaders to grasp the urgency of climate change or the opportunities of action”.

He told the crowd that the central issue was “our future, us, our friends and family, and the human family around the world, where climate change is already intensifying storms, floods and droughts, undermining livelihoods, exacerbating conflict and creating refugees”.

In Cork, a teenager who won the BT Young Scientist of the year competition for her research on solving the global food crisis was among close to 400 people who attended the climate change rally in Cork city centre on Sunday.

Sophie Healy Thow (17) from Kinsale, Co Cork, who was named by Time magazine as one the most influential teenagers in the world, said it was important to build momentum prior to the meeting in Paris.

“My particular area of interest is food security. To make sure the world is food secure, we need 50 per cent more food by 2015 - and that is a crazy amount.

“We need everybody to get together to achieve these goals,” she said.

Attendees at the rally on Grand Parade held placards with slogans such as System Change not Climate Change, Keep Fossil Fuels in the Ground and There is No Planet B.

In Belfast, the threat of Storm Clodagh was not enough to keep about 300 protesters from gathering at Writers’ Square.

Amandine Chesnel (8), from Belfast, was among the young activists. Carrying an Act Now - There Is No Plan B banner made with the help of friends, she explained her motivation for joining the day of action. “I don’t think that the world should be overheating,” she said.

Demonstration organiser Niall Bakewell, from Friends of the Earth, said: “It is a very important gathering of world leaders and we need around the world to give a message that they now are running out of time to get the right deal.”

“We have had mixed messages from the government in terms of investment in renewables, and that is disincentivising investment - but there are real actions we can take.

“We have got fantastic wind, wave and tidal power, we can retrofit our housing and really make a difference for people’s lives in Northern Ireland and climate change globally.”

In Galway, several hundred people including performers and drummers braved heavy downpours of rain and a southwesterly gale to take part in Sunday’s Carnival for the Climate.

Chanting reworked lyrics to the tune of the Italian civil war anthem Bella Ciao, the participants set off from Eyre Square to the Spanish Arch.

The event was organised by Transition Galway, and was supported by representatives of a number of groups including NUI Galway’s Irish Centre for Human Rights and Amnesty International.