The kids are all right on climate

Environmental awareness – the need to reduce, recycle and make Ireland a truly green island – begins in our education system, as the Green-Schools Expo shows 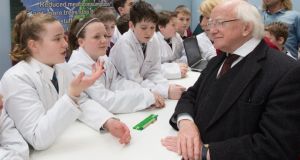 Think in: the President meets pupils from Glenamaddy and St Brendan’s schools at the Green-Schools Expo. Photograph: Naoise Culhane

If the students exhibiting their projects at Ireland’s first environmental exhibition for schools were the world leaders of today, we might be farther along the road to embracing the solutions to climate change.

President Michael D Higgins congratulated the young people for their work, emphasising that we all have a responsibility to do things differently.

“Climate change is one of the greatest challenges of our time,” he told them. There was an enormous amount of money invested in trying to obstruct the science of climate change. Thankfully, the scientists prevailed with the research.

“Sharing your concern for climate change and reconnecting with nature will help build synergies that will help eliminate conflicts over resources in the future. The work in this exhibition will help and encourage others. There is a role for all of us in this: world leaders, parliamentarians and all of you.”

The sixth-class pupils from St Brendan’s Boys’ National School in Loughrea, Co Galway, have the solutions to climate change on the tips of their tongues. Dressed in white laboratory coats, they speak with authority about the benefits of electric vehicles, vegetarianism, clean energy and energy-efficient homes.

“We should cut down on meat, because one burger is the carbon equivalent of driving a car for a month,” says Craig Griffin.

“We should use more clean energy, like the hydro power plant planned for Silvermines in Tipperary,” says Shane Mitchell.

“We should have electric tractors and tractors running on the methane from cows,” says Daragh Keary.

“We should have passive homes which are heated by body heat and so airtight you can’t even have a letterbox,” says Mark Glynn.

Some students aren’t quite as tuned in to sustainable living, but they have some interesting ideas nonetheless. St Mary’s secondary school for girls in Mallow, Co Cork, is working towards its first green flag for reducing litter and increasing recycling. With sponsorship from An Taisce, the school launched a litter challenge in which class groups are in charge of cleaning up zones around the school at the end of lunchtime.

“We play music for five minutes at the end of break time while we clean up. People are really getting into it,” says Aisling O’Sullivan, who is here with Áine Hennessy and Abi O’Regan. In a year the school has reduced general waste by a third, saving €200 a month.

Coláiste Oiriall, in Monaghan town, has also been working towards its first green flag, under the litter and recycling theme. As part of their efforts the students organised a clothes swap, in which first- and second-year students brought in unwanted clothes to exchange.

The event saw 50kg of clothes be swapped, saving 200kg of carbon in the process. They have won a One Good Idea award from the Sustainable Energy Authority of Ireland for the initiative.

St Michael’s College in Ballsbridge, in Dublin, gets a lot of attention for its mobile hydroponic window farm, which is full of aromatic herbs. “The one we have at the school is eight to 10 rows long and four recycled two-litre bottles high. Herbs and tomatoes are able to flourish in a small space like this grown without soil with a water pumping system,” says Joe Walsh.

He is keen to explain how urban food projects like this one are used in the developing world to provide towns and cities with local food. “I believe cucumbers are grown in this way in Ireland now,” he adds.

Signs promoting water conservation are also displayed around St Michael’s College, reminding students that each of us uses about 150 litres of water a day.

Olamide Adegoke, who is in sixth class at Aston Village Educate Together National School in Drogheda, Co Louth, explains how her “dream school” would function.

“It would have energy-efficient light bulbs, water butts, solar panels and different types of bins. We would have signs up to tell people to recycle, let in natural light, switch off lights and turn off the computers fully.

“We would also explain the 15-minute rule, which is that you can’t switch off the lights at small break, because it actually wastes more energy turning them off and on again in a short time,” she says.

The students from Belvedere College in Dublin proudly show off their designer bike rack, shaped like a curved pencil. Because so many students come from outlying regions, the school can’tparticipate in the Walk on Wednesdays initiatives, which encourages students to walk to school. Instead it held an art competition to design a new bicycle rack, and An Taisce sponsored its construction in time for the exhibition.

State agencies such as the Sustainable Energy Authority of Ireland, Bord na Móna and the Environmental Protection Agency also have information stands for the young audiences. And a series of talks throughout the day includes one on green campuses.

University presidents and vice-presidents from Trinity College Dublin, Dublin City University, University College Cork and Galway-Mayo Institute of Technology turn up to discuss the issues. In spite of the absence of student leaders, the academics agree that the Green Campus initiative is mainly led by students inspired by Green Schools.

Waste, water consumption and paper consumption are easier to tackle than retrofitting old buildings, embracing green technologies and embedding sustainability into the culture of university campuses. “There is nothing bigger than climate change and sustainability, and this generation of students want to be change-makers,” says Prof Brian MacCraith, president of DCU.

Taking action: How our schools are shaping up

– About 4,000 primary and secondary school students visited Ireland’s first environmental exhibition for schools, Green-Schools Expo 2016, at the RDS, in Dublin, at the end of February.

– The expo featured projects from 23 schools, chosen for their innovative or inventive approach to the environmental-management challenges posed by the green-flag themes of litter and waste, energy, water, travel, biodiversity and global citizenship.

– More than 3,000 schools have been awarded green flags as part of the Green-Schools programme. Known internationally as Eco-Schools, this environmental-management education programme operates in 58 countries, including almost all countries in the European Union.

– Green-Schools is co-ordinated by An Taisce with support from local authorities, Government departments and State bodies.