Most politicians pay some lip service to the environment and tackling climate change, but it’s at the bottom of most political agendas. How can we change this? 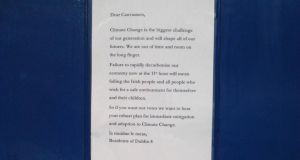 Why does the health of our natural environment barely figure in the current election campaign?

At first sight, the answer seems obvious. In the words of Bill Clinton, “It’s the economy, stupid.” Everybody knows money makes the political world go round; other concerns are supposed to become insignificant when we cast our ballots.

As long as 50 years ago, US senator Gaylord Nelson pointed out that this approach gets the world back to front: “The economy is a wholly-owned subsidiary of the environment,” he declared. “Not the other way around.” Or, to translate his point into the jargon of the moment, a secure fiscal space depends directly on a healthy environmental space.

It’s a no-brainer, really: a degraded field cannot produce flourishing crops. The dustbowl crisis in the US demonstrated this principle dramatically. For centuries, however, leaders of all political stripes have counted on the seemingly infinite abundance of our planet to make this problem disappear.

But our resources are finite, and the acceleration of climate change is just one indicator that this problem won’t wait any longer, not in the 21st century. Everything in our world is intimately connected; we have now trashed so much of it that the consequences are, quite literally, flooding all the way to our doorsteps. But that message is still not getting through to our mainstream politicians.

Pleasure in the natural world

He seemed genuinely interested in hearing more. He clearly took some pleasure in the natural world. He recalled hearing corncrakes in his youth, he told me, and regretted their disappearance from most of our countryside. He expressed enthusiasm for the grey partridge reintroduction project.

I then confessed, slightly embarrassed by my ignorance, that I did not know the name of his party’s environment spokesperson. He was rather more embarrassed, wryly admitting that he didn’t know either. He turned to his adviser, who studied his boots. “We’ll have to get back to you on that, Paddy.”

They didn’t. The environment was just not on their party’s radar.

It would be easy to score a cheap political point by identifying this party. However, a lack of attention to the natural world on which we all depend is typical of the bigger parties. Click through the manifestos of Fine Gael, Labour, Fianna Fáil and Sinn Féin, and you’ll find that, while there is lots of lip service to climate change targets, higher profile policies repeatedly contradict them.

There are occasional good ideas, especially Labour’s green infrastructure fund, but few specifics and no overall environmental vision. The kind of leadership that Mary Robinson exercises so intelligently and passionately on these questions internationally is entirely absent. The smaller parties and some Independents, it’s true, generally give the issue more attention. The Green Party, as you would expect, has extensive policies in this area.

At the other end of the spectrum, those Independents who campaign for continued turf-cutting on our vanishing raised bogs may be wrong-headed, but they at least cannot be accused of ignoring environmental questions.

The Social Democrats have had little time to create any detailed policies, yet it’s already clear from their manifesto that the party is giving some thought to environmental matters.

The Socialist Party and People Before Profit both devote significant space to the environment from their own perspectives.

Small parties may become big parties one day, and enter government much earlier than that. But it remains deeply disturbing that, at a moment in history when the degradation of the natural world has more direct impacts on more people than ever before – think flooding, think hurricanes, think forced global migration – the major parties pay it so little heed.

Obviously you can vote for a small party if you so choose. But we need urgent environmental action on many fronts under the next government. We can’t wait for a majority to vote Green and red.

It may be equally or more important to make the big parties aware that the health of our environment matters to ordinary people across the whole spectrum of society, and not just to a few isolated “environmentalist” coteries.

It is an enviable characteristic of Irish democracy that we have a real opportunity to influence politicians during an election campaign, by talking to them face-to-face on our own doorsteps. It’s one of our great traditions, one that everyone concerned about our environment should embrace robustly.

You’ll have your own priorities, of course, but you might find some of the suggestions in the panel useful. We’d like to know how you get on.