There were some exceptions, with higher averages and extended sunshine in Dublin 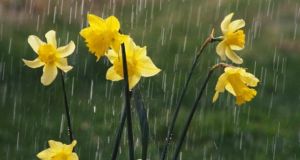 March proved to be cool and windy for northern and western areas, with a large disparity in conditions witnessed across the country. Although extreme lows were rare, it was a cold month

The weather was at its worst for a wet and windy west last month, but parts of the east experienced extended sunshine and mild temperatures according to Met Éireann.

Overall, March proved to be cool and windy for northern and western areas, with a large disparity in conditions witnessed across the country. Although extreme lows were rare, it was a cold month with most stations recording below-average air temperatures.

St Patrick’s Day was one of the warmest days in many places, along with the 19th and 28th. Last month’s highest temperature came on the 7th at Phoenix Park when the thermometer tipped on 15 degrees.

Just a few miles away, Dublin Airport recorded its sunniest March days in 34 years on the 21st and 22nd, when there was practically unbroken sunshine. On the other side of the country, the same couldn’t be said for Knock Airport which saw practically no sunshine for a total of 11 days.

Nearby Claremorris had its wettest March since 1994, as did Athenry, while over 2.5 centimetres of rain fell at Valentia Observatory in Kerry on the 25th.

Gusts of up to 120km/h were experienced at Malin Head in Donegal on Tuesday, which also saw storm force winds on the 9th. Elsewhere, Met Éireann reports that two-thirds of stations had their highest monthly wind speeds for up to a decade.