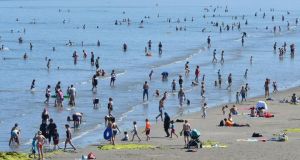 Swimmers have been warned about sightings of the notorious Portuguese man o’war and the likely arrival of other nasty species of jellyfish on Irish beaches, washed in during August from warmer currents.

Although not technically a jellyfish, two man o’wars, which inflict severe stings, washed up in Co Waterford recently and there have also been sightings of barrel jellyfish which grow up to one metre in diameter but which are relatively harmless.

Issuing the warning yesterday, John Leech of Irish Water Safety (IWS) said the warm water currents were also likely to mean the arrival of the lion’s mane species which can extend to a diameter of two metres and can also pack a severe punch in terms of sting.

“The Portuguese man o’ war is quite dangerous. It can bring upon an anaphylactic [or serious allergic] shock depending on the person’s health; some older or younger people can have this response,” said Mr Leech.

The species is described as being large and conspicuous, up to 30cm long and 10cm wide, silver-blue in colour and with a red or pink tinge.

The lion’s mane jellyfish has eight lobes with eight clusters of up to 150 tentacles each and its colour varies from deep red to yellow.

“It wouldn’t surprise me at all if within a fortnight’s time we also had the lion’s mane in the water as well,” said Mr Leech. “The lion’s mane and the Portuguese man o’war are the two jellyfish that cause the real problems when they come into our water.”

There are a greater number of jellyfish stings at this time of the year due to the water temperature and the amount of people on beaches, but these unwelcome visitors are unlikely to stay much past mid-September.

Despite urban myths of old, Mr Leech said that neither urine nor vinegar helps in treating stings with hot water being recommended as the most effective solution, although without inflicting burns.

Meanwhile, the IWS has reported lifeguards rescued 413 people last month which, while high, was 146 fewer than in July last year, a month in which 13 people drowned; the largest number in a single month since 1976.