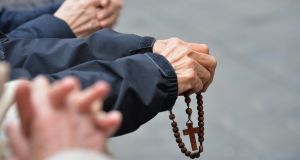 Eileen Finnegan from Kilgarvan said she must be the only person in the country to thank the storm – after it washed up much-loved rosary beads which had been stolen from her car, along with a Padre Pio medal. Photograph: Luca Zennaro/EPA

Storm Desmond is being credited with the return of religious items including rosary beads to a woman in Co Kerry in a bizarre story in which a hunter mistook her stolen bag for a duck.

Eileen Finnegan from Kilgarvan said she must be the only person in the country to thank the storm – after it washed up much-loved rosary beads which had been stolen from her car, along with a Padre Pio medal.

Ms Finnegan had been to mass in Kilgarvan on Saturday, November 14th, at the Michael J Quill community centre – only to return to her car to find it had been broken into and her bag removed.

Two other cars were also broken into during the mass.

Ms Finnegan’s bag contained a sum of money, but more importantly to her, it held her late mother’s rosary beads and a Padre Pio medal.

She put an appeal out on local radio asking that the beads be returned, saying whoever stole the bag, could keep the money.

A month later Storm Desmond struck Kenmare, flooding the fields along the banks of the River Sheen.

Last Friday a duck shooter from Millstreet in Co Cork arrived and found what he believed to be a duck but it turned out to be Ms Finnegan’s bag.

The bag was “full of seaweed” indicating it had been washed into the estuary and back again.

All the zippers and pockets were open – but inside the lining were the rosary beads and the medal and Ms Finnegan’s name could still be made out.

The duck shooter’s nephew working in a local hotel recalled Ms Finnegan’s appeal and she was traced and reunited with her bag and beads.

“Storm Desmond brought this to me. I must be the only person in Ireland happy with that storm. Obviously whoever broke into the car took what they wanted from the bag and threw it over the ditch and the flood came in and washed it away,” she said on local radio on Monday.

She has gotten rid of the bag but the beads are being repaired.

She said the episode convinced her “there is definitely someone up there”.