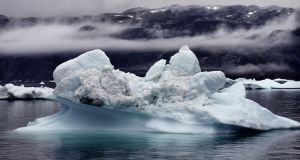 The UN hopes to get commitments from more than 190 countries to keep global warming below 2 degrees. Photograph: Kadir van Lohuizen/New York Times

The Government is to lobby the EU for a lower cut in the State’s greenhouse emissions than the proposed 40 per cent target Brussels is seeking.

While the EU has committed to an overall 40 per cent cut in emissions by 2030 compared to 2005, the reduction for each member state will vary and will be individually negotiated next year.

As pioneering climate change legislation completes its passage through the Oireachtas this week, senior Government sources have said it would be difficult to achieve the target due to Ireland’s dependence on agriculture and the impact of the recession.

In March this year the EU agreed on a new overall 2030 framework for climate and energy which was submitted to the United Nations.

This is ahead of the UN Framework Convention on Climate Change (COP 21), which begins in Paris in late November. COP21 hopes to get commitments from more than 190 countries to keep global warming below 2 degrees.

While the Bill has been sharply criticised for setting no targets for 2050, significant amendments have been accepted by Fine Gael, including a commitment to “climate justice” as well as the guaranteed independence of an expert advisory committee on climate change.

It also commits the Government to abide by targets agreed at EU level.

In its negotiations with the EU, the Government will argue the EU should have regard for the recession and the constraints it placed on investment to reduce emissions.

The latest estimate is that Ireland will fall short of the 2020 target by 6 per cent.

The inclusion of a “climate justice” clause came as a surprise as Fine Gael had originally argued against it.

However, Taoiseach Enda Kenny agreed with Independent TD Maureen O’Sullivan in the Dáil last month that such a clause should form part of the Bill. Climate justice attempts to address perceived injustices caused by climate change.

Its addition is seen as a concession by Fine Gael to Labour.

Oisín Coghlan of Friends of the Earth said the Bill had improved but remained weaker than it should be.

“While the biggest gap is the absence of an explicit 2050 target, the Bill does refer to the Government’s national policy objective of 80 per cent reductions in emissions from electricity, transport and buildings and carbon neutrality in agriculture.

“Meanwhile . . . this Government will go through its term without adopting a national action plan to reduce emissions.”