Some people in flood areas to be relocated - OPW Minister 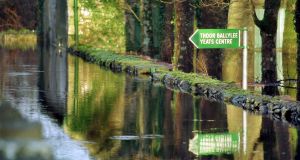 The road leading to the Yeats Tower at Thoor Ballylee in Co Galway, which is flooded in areas by up to six feet of water. Photograph: Joe O’Shaughnessy 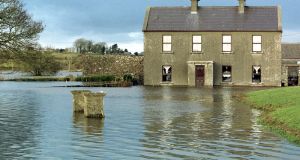 A flooded farmhouse at Carrabane near Thoor Ballylee in south Co Galway. Note the near-submerged posts of the front gate in the foreground. Photograph: Joe O’Shaughnessy

A new State-backed relocation scheme for homes prone to flooding could be in place by this winter, Minister of State at the Office of Public Works Seán Canney has said.

“This is the only solution for some people, and it’s not rocket science,” Mr Canney told The Irish Times.

The scheme will be limited to cases where there is no way of engineering a solution, and will not protect many flood-prone areas if there is heavy rainfall this winter, he cautioned.

The scheme may also apply to vulnerable farmyards, and will be considered as part of an interdepartmental report on flooding policy which is to come before the Cabinet this month, Mr Canney added.

The interdepartmental group set up by Mr Canney’s predecessor, Simon Harris, was tasked with examining all areas of the official response to flooding, including insurance, home relocation, flood relief and property rights.

Funding has not yet been secured, but it will be similar to a €5 million scheme introduced in 2010 after severe winter flooding in late 2009 – less than half of which was spent, he said.

The relocation scheme will be separate to a 10-year, €431 million capital works flood relief scheme promised by the last government, some €50 million of which is due to be allocated this year. Mr Canney said the capital spend on flood relief should rise to some €100 million annually by 2018.

He told the Irish National Flood Forum conference in Co Galway at the weekend that 10 major capital flood defence schemes were under construction, two more were due to begin later this year and 23 were at planning and design stage. These projects would provide protection to at least 4,000 properties at risk of flooding.

These projects are in advance of long-term plans for 300 “at risk” areas under the capital works scheme – known as Catchment Flood Risk Assessment and Management (CFRAM) plans.

Mr Canney said the last of these plans has been put out for public consultation, and he hoped they would be adopted by local authorities next year and implemented in order of priority.

Speaking before a fundraising poetry event at the tower this weekend, curator Rena McAllen said flooding at the tower last winter did not recede until March.

Ms McAllen is part of a community group that acquired a lease for Thoor Ballylee – a 15th century Hiberno-Norman tower house with what Yeats described as a “winding, gyring spiring treadmill of a stair”– after it was closed by Fáilte Ireland due to flooding in 2009.

During Yeats’ tenure, the Streamstown river would food the building’s ground floor, but the flooding is now more frequent and much higher.

Ten new advisers to junior ministers to be appointed despite previous Government decision 13:10
Man killed after car was driven wrong way down N7 is named 13:06
Deported man says he has lived in airport for months 12:47
Judge orders release of woman who poses ‘imminent’ risk to mother 12:19
Flu vaccine delay should be resolved by end of October - IMO 12:18