Some flooded Limerick homes ‘to be rebuilt on higher ground’ 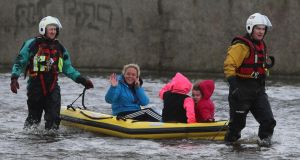 Houses that have been left uninhabitable by recent flooding may be demolished and rebuilt in other locations, according to Minister for Housing, Jan O’Sullivan.

She was speaking today while visiting flood-hit St Mary’s Park in Limerick city alongside her Labour Party colleague and Minister for Social Protection, Joan Burton.

The cost of the cleanup where more than 300 homes in the estate were badly hit by unprecedented flooding last week is expected to run into at least tens of millions of euro.

However, some residents may now find they will have to leave their homes for good if the Government decides the best option is to demolish houses and rebuild them on higher ground.

“One side of St Munchin’s Street (St Mary’s Park) - which is the side nearest the river - is due for demolition anyway, so it doesn’t make any sense that there should be major work done on those houses.

“We hope to fast-track it, it’s very early stages as yet. But there are considerations going on as to how to fast-track things,” Ms O’Sullivan said.

The issue will be how to manage the movement of people living in private and local authority houses, which already come under the scope of the regeneration of St Mary’s Park, the Minister explained.

“There is a mixture of private and public (houses) and we have them all identified. For a long time now the council officials and the regeneration people have been talking individually to the householders whether they own the houses or whether they are council tenants.

She added: “There are various options available to them (householders). One of the options is that there will be rebuilding done on the higher part of the Island (Kings Island), there will be new houses built there. So, in some cases people may have to go to temporary solution for a period of time until there is a new house built in the area. Others may choose to take vacancies that arise in their areas of choice, which might not be in the King’s Island, but it might be fairly near or fairly adjacent to it.”

The Minister said there will be “some (new) building within the King’s Island area but only on “high ground”.

“The current regeneration plan aim is to knock the outer area of St Munchin’s Street and some other areas. Other areas are defined for refurbishment. There are parts of St Mary’s Park that weren’t flooded so there are still some areas that will be habitable into the future,” the Minster added.

She said residents were being contacted by officials from the council and the regeneration project to discuss how to move forward with the upgrading of the estate.

She said people from this area would be provided with monetary support for rehousing, the value of which would depend on whether they rehoused themselves or were provided with accommodation by the council.

Ms Burton added: “In terms of a house which became entirely uninhabitable, we would liaise with the OPW, as well as the local authority, because it really might make no sense to rebuild on that particular spot.

“All of these issue have to be negotiated with the individuals (householder) and their families, because they are very big decisions and a lot of people often like to stay in their home place, so this is something that will have to be decided on over a period of time.”

1 Dig for remains of Red Hugh O’Donnell finds skull and coffins
2 ‘I will be alone for rest of my life,’ says woman raped as she slept
3 Miriam Lord: Leo’s Phoenix pecs just a storm in a bag of cans
4 Archaeologists are ‘quite sure’ they have found Red Hugh O’Donnell’s burial place
5 Proposed ban on Israeli goods a sticking point in government talks
Real news has value SUBSCRIBE