Soil is too small a word for it

It’s one of the basic components of life. A new campaign highlights the importance of good soil for healthy food, clean water, carbon storage and flood prevention 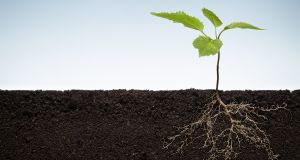 Unless you are a farmer, forester or a gardener, you probably don’t think about soil that often.  But, consider this – without soil, nothing on earth – apart from bacteria, fungi and viruses – would exist. Together with water and air, soil is one of the basic components of life.

“Without soil, we would have no living creature – no trees, no flowering plants, no crops, no animals, no birds or humans,” says Klaus Laitenberger, the spokesperson in Ireland for a new pan European campaign calling for better soil protection.

The People4Soil campaign has mounted a European Citizens initiative (environmentalpillar.ie/people4soil) calling on the European Union to create an EU Soil Directive to protect our soils.  Currently, there are similar directives to protect our water, air and nature but none for our soil.

“Soil is a remarkable substance that turns unusable materials into plant food. It provides us with healthy food, filters water, supports wildlife, stores carbon and protects us from floods,” says Laitenberger, who is also an organic farm inspector with the Irish Organic Trust.

The People4Soil campaign argues that over the past 50 years, Ireland’s soils have come under increasing pressure from intensification of agriculture, erosion, overgrazing, disposal of organic waste, industry and urbanisation.

Laitenberger says that agricultural soils in particular have become more compacted with use of heavier machinery and heavier cattle breeds.  “Rain can’t infiltrate into these more compressed soils, therefore it runs off and is one cause of increased flooding,” he says.

As an advocate of organic farming, Laitenberger is also adamant that the widespread conversion of farmers from using farmyard manure on the land to using slurry has resulted in less nutritious soil – which in turn, can affect the quality of what grows on that land.

The United Nations Food and Agriculture Organisation declared 2015 as UN International Year of Soils – such is its importance in terms of sustainable food production. The FAO actively highlights the problems caused by degradation of arable land around the world.

The importance of soil is also prominent in the 2015 UN Sustainable Development Goals with six of the 17 goals linked to the sustainable management of land. The awareness of the finite nature of land as a resource, has, according to some commentators, brought the significance of soil science sharply back into focus.

Cian O’Mahony, scientific officer with the Environmental Protection Agency (EPA) says that compared with other European countries, Ireland still has rich and productive soil, primarily because the high percentage of land still used for agriculture. “The biggest impact on soils in Ireland is due to the expansion of our towns and cities,” he says.

O’Mahony agrees, however, that an EU Soils Directive would be useful and references the fact that a proposal for such a directive was pulled by the European Commission in 2014. “We have no national legislation on soil, and the absence of an EU directive means that we have no transposed legislation from Europe either.”

The EU Seventh Environment Action Programme (2014), however, still commits member states to increase efforts to reduce soil erosion, increase soil organic matter and remediate contaminated sites by 2020. The EPA is responsible for the monitoring of the quality of soil on industrial and landfill sites via environmental impact assessments, while the farming body Teagasc oversees soil quality on agricultural land.

According to O’Mahony, there is a need for better soil management in agriculture, forestry and spatial planning.  However, he is optimistic that both the farming and forestry sectors are taking the first steps to looking after soil better.

He points to the new national soil map (soils.teagasc.ie) which identifies the range of soil types across Ireland. He also points to new tools for farmers to assess the quality of their soils. “There is greater awareness of vulnerable soils, how the current land use is impacting on them and what needs to be done to protect them,” says O’Mahony.

The National Peatlands Strategy (2015) is an example of changes in the management of land, following large scale soil erosion in blanket and raised bogs in Ireland.  Similarly, soil protection is one aspect of recent commitments to plant broadleaf trees within new forestry plantations.

Prof Rogier Schulte, formerly of Teagasc and now at the University of Wageningen in The Netherlands has been studying Irish soils for more than five years.  He says that the mapping of soil types can lead to “climate smart land management” where different soils can be given roles that society requires of them.

In this approach, Schulte and an international team of researchers have defined five functions for soil: The provision of food, fibre (eg wood) and fuel, the provision of clean water, carbon sequestration to offset greenhouse gas emissions, a habitat for biodiversity and a home for nutrients (eg sewage sludge and pig/poultry slurry).

“All soils provide all these functions but some provide them better than others. The trick for sustainable land management is to make sure that the right soil does the right thing where it is needed,” says Schulte.

It’s only when you look at soil research like this that you can see exactly what climate-smart agriculture promises. And, you also realise that if Ireland is serious about reducing its carbon emissions from agriculture for the EU 2030 targets (we have already gone above our 2020 targets), careful attention to which functions soils perform best will be a key.

What’s in your soil?

An average soil sample is 45 per cent minerals, 25 per cent water, 25 per cent air and 5 per cent organic matter. Different sized mineral particles such as sand, silt and clay give soil its texture.

Soil has three main properties – physical, chemical and biological, all of which interact to be beneficial or harmful to our planet. For example, soils that are physically compacted can’t hold water well and therefore contribute to flooding, whereas soils that are looser can store water which helps prevent both flooding and droughts.

The chemical reactions of the minerals and trace elements in soil become a source of nutrients for food crops as well as potential for carbon storage. The biological activity of the billions of insects and microorganisms (soils hold about one quarter of the world’s biodiversity) in healthy soil make it physically looser and more aerated which promotes the chemical activity to provide nutrients for grass and food crops for animals and humans.