Sligo floods: ‘Our home is not safe, but nobody is helping us’ 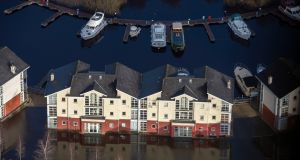 Householders and businesses in the northwest expressed frustration yesterday as rising flood waters threatened homes and forced some commercial outlets to close their doors during what should be their busiest season.

In Carraroe, outside Sligo town, Catherine Lynch wept as she described how her family had been forced to use a boat to navigate up to 20ft of water around their home.

Ms Lynch, who had finished renovating her home last week, said furniture that had been stored in her flooded basement was floating around her yard, where a polytunnel and two garden sheds were submerged.

The devastated homeowner, whose husband, Sean, died two years ago, criticised the response of Sligo County Council, saying it was “no help” and had advised the family to get out.

“It is not safe, but nobody is helping us,” she said.

A spokesman for the council said fire service personnel and road crews had visited the house “on numerous occasions” in recent days and had been working to alleviate the flooding and protect the house.

The mayor of Sligo municipal area, Cllr Thomas Healy, said a number of houses in the Woodlands estate in Sligo town and in Collooney village were under threat, but householders did not want to leave their properties.

“They don’t want to give up without a fight. I know of one man who has been forced to remain upstairs in his house”, said Cllr Healy.

In Breeogue, near Strandhill, Tom Hickey, owner of the Perfect Day surf school, said council staff had come to the rescue after flood waters streamed through two bedrooms, a livingroom and the hallway of his home .

“It’s a 100-year-old cottage, we are there for 30 years, and nothing like this happened before,” said Mr Hickey. “My yard was under two feet of water, which was threatening the house, but the council staff identified the source of the problem and sorted it.”

Roads closed in Sligo include the old N4 between Collooney and Ballisodare and several roads around Carraroe.

In Co Leitrim, a number of properties in Carrick-on-Shannon and Leitrim village are under threat, with the multiplex cinema in Carrick, which was devastated by floods in 2009, once more at risk.The cinema has been closed since Saturday.

Owner Liam Farrell expressed fury that no lessons had been learned since the devastating floods of six years ago. He said a “bullshit report” had been produced in the wake of that disaster .

“I am absolutely appalled,” said Mr Farrell, adding that the water was now inches from the Cineplex, which he had to refit after the 2009 floods and which no longer has flood cover.

“We have 25 employees, we pay VAT and PRSI, and our rates are €23,500 a year,” he said. Development charges paid to Roscommon County Council when the cinema was built 10 years ago topped €1 million, he added.

Mr Farrell said that the Shannon CFRAMS study (Catchment Flood Risk Assessment and Management), commissioned after 2009 in a bid to identify and counter flood risks, had only recently produced a preliminary report.

“I am angry,” he said, adding that the criticism of development on flood plains around Carrick was “a red herring”.

Diversions remained in place on the Dublin side of Carrick yesterday, while some streets in Leitrim village were also impassable.

“There is no doubt that there was development in places which should never have been built on,” she said. “Nobody could defend that”.

He said that a few houses in Leitrim village had been evacuated, with communities there and in Carrick bracing themselves for more rainfall, as is predicted for the coming days.