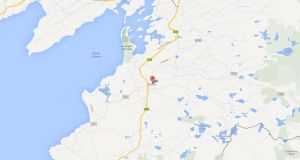 A map showing the location of the medieval monastic enclosure at Drumholm, near Ballintra, in Co Donegal. Map: Google Maps

The remains of a medieval monastic enclosure which, it is claimed, could be as big a discovery as Clonmacnoise, Inishmurray or Reask in Co Kerry were unearthed this week.

The site is at Drumholm, near Ballintra, Co Donegal, where St Ernan, nephew of St Columba, is said to have been buried around 640 AD.

Archaeologists, who started their dig on Monday, believe the site it is of major national importance.

They have discovered traces of a buried monastery with beehive-like circular stone huts where farming monks would have lived. The discovery, which dates back to the early 7th century, includes evidence of iron being worked and smelted, butchered animals and pottery pieces.

There is a graveyard and the remains of an old church above ground at Drumholm which is a recognised historic site.

The local Church of Ireland community wanted to establish whether the graveyard could be extended and a car park erected to accommodate future burials. In accordance with planning procedures when there is a development close to a known historic site, experts from Wolfhound Archaeology were recruited to conduct an assessment.

Archaeologist Mick O’Droma said as a result of the discovery, plans for the extended graveyard would have to be abandoned. He said the new burial ground also had to be ruled out because it would have been in an area of very deep water-logged peat.

He said: “It’s unfortunate for the community they haven’t got their development. The silver lining is that we found an archaeological site at Drumholm that is much more extensive, much more important than we had previously known. “I am hugely excited by the discovery. We have definitely put it up there to be possibly on a par with Clonmacnoise or Inishmurray.”

Following months of study of documents and a geophysical survey, test-trenches were dug this week.

They revealed traces of a large oval-shaped enclosure below ground. Mr O’Droma, who directed archaeological excavations across Ireland including at the Twomileborris site on the route of the N8/M8 road scheme, said the Drumholm trenches will now be closed and an extensive report prepared for the National Museum of Ireland, the Department of Arts, Heritage and Gaeltacht, and local planning authorities.