Two teenagers remain hospitalised, one critical, after being swept off rocks at Hook Head

Images from Galway show the extent of damage caused by Storm Desmond on the weekend. Pics: Joe Shaughnessy/Ray Ryan 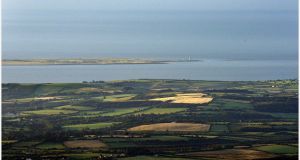 Hook Head in Co Wexford. The girl was walking with three teenage boys as part of a larger group when they were hit by a wave and dragged out to sea. File photograph: Brenda Fitzsimons/The Irish times 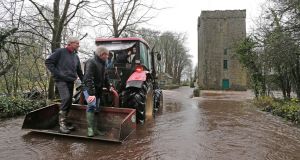 Colm Farrell and Cllr Joe Byrne survey flooding at the Yeats Tower near Gort, Co Galway on Sunday. A clean-up is under way across many parts of the country on Monday after Storm Desmond caused widespread flooding. Photograph: Joe O’Shaughnessy

Scouting Ireland is to launch a review around the events which led to four teenagers being swept out to sea during an outing a Hook Head on Sunday afternoon.

A 15-year-old girl remains in critical condition and a boy of the same age is in a stable condition in Waterford University Hospital after they, along with two other boys, were dragged out to sea by a rogue wave. They were reportedly walking across rocks along the foreshore at the time.

The injured pair were airlifted to safety by an Irish Coastguard helicopter, before being transferred to hospital where family are said to remain by their sides.

In a statement released on Monday, Scouting Ireland described the event as a “very serious” and “shocking” accident, and said a “thorough review” of both the incident and the organisation’s protocols and procedures for such outings will now be undertaken.

“The welfare and safety of our members is of paramount importance to us. We will therefore be undertaking a thorough review of this incident and of our protocols and procedures,” it said.

Speaking to The Irish Times, Scouting Ireland chief executive Paul Lawlor said the scout leaders who were on duty during the expedition involving 14 children were “experienced and well-trained”, and were trusted to make a judgement call as to whether the trip should go ahead following the weekend’s stormy weather.

As part of the review, Mr Lawlor said Scouting Ireland will assess if there were “things that could have been done to make the trip safer; could they have avoided this or the other.”

He said representatives of the group will on Tuesday begin speaking to other young people who were on the trip and their parents in a bid to ascertain what happened in the lead up to the incident.