Sale of Coillte tree-harvesting rights would raise ‘a few grains of sand in a desert of debt’, committee told 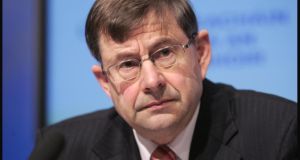 Selling Coillte’s harvesting rights would generate only enough money to pay three weeks’ interest on the nation’s debts, the Oireachtas Committee on Agriculture has heard.

Matt Staunton, secretary of the Impact trade union, said the likely financial return would be “a few grains of sand in a desert of debt” while jobs were jeopardised, sawmills closed down and tourism dealt a “devastating blow”.

Mr Staunton said prospective buyers of the harvesting rights would be unlikely to allow the liberal public access to forests permitted by Coillte.

There has been widespread speculation that the State will reverse its plan to sell the rights, particularly following comments by Minister for Natural Resources Pat Rabbitte, who said privatisation was looking increasingly unlikely. Last week, Minister for Agriculture Simon Coveney downplayed those remarks and told the Dáil that regardless of what other Ministers had said, he and Minister for Public Expenditure and Reform Brendan Howlin would bring a report to Government on the various recommendations for Cabinet to decide. That report is expected to be presented next Tuesday.


‘Farcical situation’
Fianna Fáil agriculture spokesman Éamon Ó Cuív said the committee found itself in a “farcical situation” where it was halfway through its hearings on the proposal to sell the rights yet it was being suggested a decision would be announced next week.

It would be “outrageous” if a decision was made before the committee had time to complete its work, he said.

Mr Ó Cuív also expressed concern that there could be “a sting in the tale” if the Government decided not to sell the harvesting rights but instead ordered the sale of part of Coillte’s plantation.

People Before Profit TD Richard Boyd Barrett called for a cranking up of the campaign against the proposed sale and said a protest would be held outside the Dáil next Tuesday. He said the State was considering an act of “cultural, economic and environmental vandalism” with the proposed sale. It was “beyond belief” this was being done to pay for the banks’ debts while a Chinese or Swiss bank could end up owning the rights.

Some 600 Coillte staff are represented by Impact. Mr Staunton told the committee a report by economist Peter Bacon found the sale would incur costs of €1.3 billion in profit flow and pension liabilities, while Coillte would still be required to maintain forest lands. It could also jeopardise 12,000 largely rural jobs .


Sugar beet lessons
Sinn Féin deputy Martin Ferris said his party was “absolutely totally opposed” to the sale of the harvesting rights and pointed to the sale of Greencore, which was followed by the closure of Ireland’s sugar beet industry.

Senator Mary Ann O’Brien said selling part of Coillte was like selling part of our “national soul”. Labour Senator Susan O’Keeffe said most committee members were very concerned “we are selling our soul for tuppence halfpenny”.