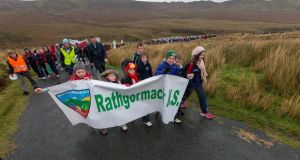 Charles J Haughey, a man well used to overseeing Ireland from helicopters, once complained about all the “great, gangling pylons [that] seem to march across the countryside like an invading army of Martians . . . up hill, down dale, across valleys and through woodlands without any regard for their visual impact”.

He was speaking in a 1985 Dáil debate on the Electricity Supply Amendment Bill – introduced by then minister for energy and Labour Party leader Dick Spring – which sought to regularise a Supreme Court ruling by giving the ESB power to erect pylons across people’s land, subject to paying compensation to these landowners. sland, Co Wexford, and Dunstown, Co Kildare.

There is now a revolt in rural Ireland against plans by EirGrid – the ESB’s successor as operator of the electricity system – for several hundred more pylons to reinforce the grid connections between Munster and Leinster, running from Knockraha power station in Co Cork to Great I

EirGrid maintains such reinforcement of the grid is necessary to ensure demand in the southeast can be supplied at all times, regardless of where the power is generated, and to connect “significant levels of new renewable generation” in the south of Ireland to the transmission and distribution network.

It is also being designed to “facilitate possible future electricity links with either Britain or France, leading to enhanced security of supply to the benefit of Irish consumers and increased competition” in the EU’s emerging single electricity market – with an eye to exporting excess electricity generated by wind farms.

A series of route options has been proposed, confronting people with the reality of EirGrid’s €500 million “Grid Link” project. They are now asking how far from their homes might particular pylons be located if one or other of these options is chosen and what impact a new transmission line might have on the landscape.

There are also concerns about the potential devaluation of farmland and homes, the impact on tourism and fears about the health effects of exposure to electromagnetic radiation from high-voltage transmission lines – although the World Health Organisation said in 2007 that there were “no substantive health issues involved”.

Grid Link is one of three major new elements of EirGrid’s overall €3.2 billion “Grid 25” plan to upgrade and reinforce the national grid by 2025; the others are the North-South Interconnector, which has been the focus of local opposition in Meath, Monaghan and Cavan, and Grid West, which has proved less controversial.

In addition, some 2,000km of existing transmission lines are being upgraded as part of the plan to underpin economic development by ensuring a secure supply of electricity.

“We have no agenda but to keep the lights on, to keep the system going,” EirGrid spokesman Michael Kelly said. “We’re not doing this for profit.”

EirGrid has its work cut out, though. On November 5th, a public meeting in Slane, Co Meath – organised by the North East Pylon Pressure Campaign – attracted a turnout of 1,000 people, while last weekend, an estimated 1,500 people hiked through the Comeragh Mountains in Co Waterford to protest against the GridLink plan.

The Comeraghs are an EU-designated Special Area of Conservation (SAC) as is the river Blackwater, which the route would inevitably cross.

“The proposed project would march a network of 45m and 60m pylons through some of the most beautiful parts of Co Waterford,” says Kieran Hartley, spokesman for Comeraghs Against Pylons.

“Some of those we have approached have counselled our group to sit back at this stage and ‘allow the planning process to go forward’, but the process is heavily weighted in favour of the developer and, in the words of one of those who have fought EirGrid in the past, as accessible to people in rural Ireland as the Ritz Hotel.”

However, Michael Walsh, EirGrid’s project director, pledged during the week that it would examine options for putting transmission lines underground, instead of dismissing these at an early stage on cost grounds – as going underground would be at least three times more expensive – and this would all be put in the public domain. Responding to public pressure for undergrounding to be at least *considered, Mr Walsh said: “We’re going to look at it in much more detail so people can see what the best available option would be.”

In the meantime, EirGrid’s public consultation programme would continue, with November 26th as the deadline for feedback.