Restore our bogs, for peat’s sake

Bord na Móna is more responsible than anyone for the mass destruction of peatland habitats. Its new approach is promising. But there are still challenging times ahead 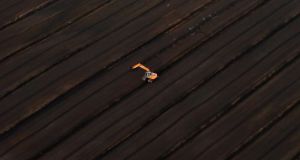 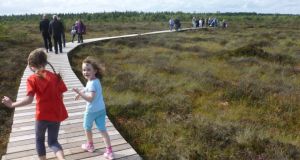 There could hardly have been a more appropriate launchpad for Bord na Móna’s second five-year biodiversity action plan last month than Lough Boora Discovery Centre, in Co Offaly. This handsome building sits in the heart of the company’s showpiece for its (relatively new) commitment to environmental stewardship. A noonday chorus of birdsong interrupted the speakers.

The Boora rehabilitation project earned a glowing endorsement from one of our wisest and most knowledgeable bog experts, John Feehan, when it was nominated for the Irish Times Best Place to Go Wild in Ireland award two years ago: “This is a true wilderness, in the sense that here nature is left to itself across a vast area of cutaway raised bog, exhibiting an ecological vitality nobody imagined when contemplating what looked like barren brown desert while the bogs were being harvested of their peat.” It is enormously popular with hikers, bikers, picnickers and nature-lovers.

Feehan launched Bord na Móna’s new biodiversity plan at Boora last month, and he expressed an equally lyrical and well-informed vision for the future of the company’s whole estate – 80,000 hectares – “when its great machines fall silent”.

But this vision, and the plan itself, are grounded on a painful past, and face difficult questions in the immediate future. No single agency or individual bears as much responsibility as Bord na Móna for the mass destruction of peatland habitats.

And the announcement last year that the company intends to continue peat extraction, and operating turf-fired power stations, until 2030 has drawn sharp criticism. Last year An Taisce won a High Court case obliging An Bord Pleanála to examine the multiple environmental effects of extraction much more closely before renewing the licence of the company’s Edenderry plant.

“What Bord na Móna are doing in their biodiversity action plans is completely inadequate,” Ian Lumley of An Taisce says, “since they are locked into an overall strategy that is absolutely unsustainable.”

Gerry Ryan, the company’s director of land and property, responds that “we understand very well that we have to transition away from peat production, but we must also preserve employment; it would not be reasonable to abandon that goal. There will be a significant reduction in production well before 2030.”

The changing attitude to the values within bogland came not just from enlightened management – the former chief executive Gabriel Darcy deserves credit for promoting the company’s New Contract with Nature – but also from within the workforce itself. Indeed, the new plan pays tribute to the role of Tom Barry, who argued for bog conservation within Bord na Móna as early as the 1970s.

By 2001 the company had appointed Catherine Farrell its first in-house ecologist. In 2008 she persuaded her employer to end a long conflict with Abbeyleix citizens who objected to peat extraction from a nearby bog. The restoration project that followed became a model for co-operation between Bord na Móna and local communities.

She now leads a highly regarded team with two colleagues, David Fallon and Mark McCorry. They developed and implemented the previous biodiversity plan and drew up the new one, in consultation with a range of stakeholders, including environmental NGOs. The plan just completed has produced big advances, Farrell said at the launch.

Rehabilitation refers to the rewetting of bogs that have been stripped of turf, creating valuable new wetland habitats – and new woodlands eventually.

Restoration of active raised bogs is a much more ambitious enterprise. It seeks to re-create the complex hydrological and ecological processes through which regenerated sphagnum moss habitats will form new peat in the future.

John Feehan says the new plan represented “the cusp on a rising graph of awareness, in appreciation of the importance of the ecological processes at work on the cutaway bogs in our care, and of how to maximise the potential in that.”

Feehan paints an eloquent picture of a potential future on our boglands where, though much is gone forever, “there is a mosaic of woodland and wetland and wild grassland, which . . . can spread and interconnect with other areas of new wildness to create an ecological network where our grandchildren . . . can wander and explore wild diversity and abundance of a kind we lost in our lifetime.”

Perhaps the most hopeful sign for the future at the launch was the presence of three teenagers from Athlone Community College: Fiona Molloy, Louise Egan and Sarah Denby.

Their project on the greenhouse-gas dynamics of restored bogs – a topic that challenges specialists – was supported by Bord na Móna and won the Environmental Protection Agency special award at this year’s BT Young Scientist & Technology Exhibition.

“We are all from agricultural backgrounds, with bogs on our farms,” they say, “but we didn’t realise how beautiful, and how important, bogs are till we saw an Eco Eye programme on rewetting. People who still cut turf don’t realise this.”

They rang the people mentioned in the programme, and developed their project. They are now working for bog conservation, starting with trying to persuade their parents to stop cutting turf, and promoting youth awareness through their Bog Blog (4peatssake. myfreesites.net).

“The most exciting thing,” says Molloy, “is to see how quickly the sphagnum grows back on a restored bog.”