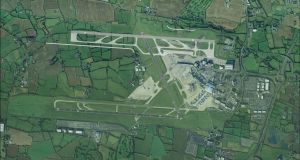 The location of the new runway at Dublin Airport set to open in 2020. Photograph: DDA/PA Wire

Residents affected by Dublin Airport’s decision to proceed with a second runway are to seek guarantees on restrictions to the frequency and hours of flights.

The Portmarnock Community Association will meet with the Dublin Airport Authority (DAA) on Monday to discuss conditions attached to planning permission granted for the €320 million runway.

Association chairman Pat Suttle said they wished to ensure that restrictions on night time flights and the frequency of flights an hour set out in the planning permission are adhered to.

One condition restricts the number of aircraft landings and take-offs between 11pm and 7am.

“We realise that airports expand, that passenger numbers are expanding very rapidly and that eventually a new runway will be required,” Mr Suttle said.

“There is no point in pushing back against the tide. Planning permission is a fait accompli. We want to make sure that the people of Portmarnock are treated properly and that due care is taken that all the safeguards are in place for our community.”

He said the residents would be seeking answers as to how Dublin Airport intended to accommodate plans for an international hub within existing hours of operations.

Mr Suttle pointed out that the new airport runway would affect the northern part of the village of Portmarnock while the southern half of the village is affected by the current runway.

Confirmation that the second runway is getting the go- ahead has been widely welcomed by business groups and the local council.

Dublin Chamber chief executive Gina Quin said it would have the potential to support another 31,000 jobs over the next two decades with an impact to the economy of €2.2 billion each year.

Neil Walker, head of infrastructure with employers body Ibec, said the project “has the potential to improve the country’s international connectivity and underpin economic growth and job creation into the future”.

Fingal County Council also welcomed the announcement, saying it was in keeping with its development plan up to 2017.

It added: “Fingal has a unique role in facilitating the sustainable development of the airport and its environs and safeguarding its potential as a national resource.”

Fáilte Ireland chairman Michael Cawley said Ireland could enjoy “sustained and long-term growth in visitor numbers” only if there was increased access to the country.

Green Party member of Fingal County Council Cllr David Healy said the runway was based on predictions for passenger numbers that were incompatible with the global warming target of limiting the world temperature rise to 1.5° agreed in Paris.

He accused DAA of being on “auto pilot and paying no regard to national and global policy to reduce emissions”.