Rescued fire piglets should ‘not be slaughtered for bacon rolls’ 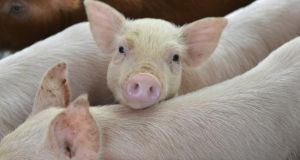 Four hundred piglets and 36 sows have died in a major fire on a pig farm in Tyrone.

Animal rights campaigners have called for rescued piglets to be sent to a sanctuary and “not slaughtered for breakfast rolls”.

Four hundred piglets, 36 sows died in a fire at a Co Tyrone pig farm on Thursday. Two buildings were also destroyed in the blaze that was described as an “awful awful disaster” Strabane farmer Hugh McReynolds.

“This is a disaster, an awful awful disaster for us because the finishers, or bacon pigs, will now not be sold to our major client the Karro Foods group in Cookstown,” said Mr McReynolds, the owner of SM Pigs Limited, which is located on the outskirts of Strabane close to the village of Sion Mills.

Firefighters were called to the blaze on the Melmount Road in Strabane at 5.40am.

Speaking at the scene, Mr McReynolds said he would have lost another 300 sows and another 1,000 piglets if not for the rapid response of Northern Ireland Fire And Rescue Service.

Firefighters remain at the scene of a fire at a shed at Melmont Road, Strabane. A number of livestock have perished. 2 appliances remain.

Mr McReynolds said it was the worst disaster in they have encountered in the business, which has been in existence for almost 25 years.

“The carcasses are being removed by knackers in accordance with the environmental legislation. They will be disposed of in the proper manner and will not be for human consumption.

“Thankfully there are no environmental issues in relation to the River Mourne which runs behind the farm.”

“It takes 24 weeks from the birth of a piglet before it goes to the abattoir and we won’t know the financial cost for another few months,” he said.

Animal rights campaign group Peta UK have said the piglets that survived would have been terrified and should be sent to a sanctuary.

“Pigs are highly sensitive and intelligent animals who are often compared to dogs for their sociable, friendly and loyal nature, and they would have been fully aware of the danger as flames and smoke engulfed their crowded sheds,” said director Mimi Bekhechi.

“The piglets who managed to survive watched their mothers and friends burn. They heard their terrified cries for help, and this experience will undoubtedly stay with them forever.

“They’ve been traumatised enough and should be sent to a sanctuary to live out their lives in peace, not put back into a system that treats them like commodities until they’re big enough to be slaughtered for someone’s bacon roll,” she said.

Max Joyce, group commander of the Northern Ireland Fire And Rescue Service said investigations were continuing to establish the cause of the blaze.

He said at its height the fire was tackled by crew members of six fire vehicles.