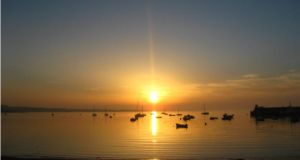 A reprieve from the rain in all parts of the country, except Ulster, last night will last into today

The east and midlands saw the worst of the weather over the weekend, with more than 80mm of rain recorded at Dublin Airport on Saturday. Up to 60mm was recorded across many parts of Leinster, where an orange level rainfall warning was issued by the forecaster.

Several roads in Dublin, including the M1 motorway, were flooded and Dart services were disrupted for several hours on Saturday morning due to flooding between Greystones/Bray and Dún Laoghaire.

A reprieve from the rain in all parts of the country, except Ulster, last night will last into today, said Met Éireann forecaster Eoin Sherlock. “Normal service has resumed, the Atlantic is back in flow and there will be a decent enough start to the bank holiday Monday. It will be dry and bright, although it will be a little bit chilly.”

Looking ahead to next weekend, Britain is bracing itself for very heavy rainfall, particular along the south of England and the east coast, but Ireland looks set to escape the worst of the wet weather with “not a bad weekend” in store, said Mr Sherlock.

Flooding in Dublin on Saturday resulted in the removal of two prisoners from Ballymun Garda station.

While most sports events went ahead as planned the GAA cancelled the All-Ireland Poc Fada finals due to be held in Co Louth on Saturday.

The annual tournament tests the skills of Ireland’s best hurlers and camogie players who must hit a sliotar over the 5km mountain course. The GAA said they would announce a date for the finals early next week .