After Reduce, Reuse, Recycle there’s a new slogan to remember if you want to help prevent waste and encourage a ‘circular economy’ during Ireland’s first Reuse Month 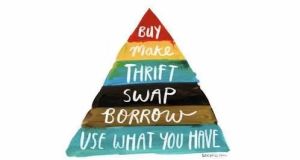 The “buyerarchy of needs”: there are five alternatives to buying new goods. We must all consider these as environmentally conscious citizens

‘Pass it on, repair it, refurbish it or share it,” says Minister for Climate Action and the Environment Denis Naughten in his role as promoter of Ireland’s first Reuse Month.

“Repair, Remake, Reimagine” is the slogan for a waste-prevention initiative that is part of an EU effort to value recyclable materials in the so-called circular economy. Unlike a linear economy, where products are made, bought and then dumped, a circular economy aspires to careful use of primary materials, built-in resilience (instead of obsolescence) and the reuse of secondary materials at the end of the products’ life.

This might sound like stepping back in time, to when postwar frugality meant that people held on to things for longer, passed on things they no longer needed and recycled everything from curtains to car parts. But the new campaign is targeted at a generation that grew up in a consumer culture that didn’t consider where things came from or went to after their use – never mind the environmental consequences of using up primary resources and dumping toxic waste.

“We are a wasteful society. It’s often cheaper to buy a new product than fix the old one. And we have become used to buying more than we need and throwing away what we’ve become bored with,” says Ali Sheridan of the sustainability website purposehub.ie.

So throughout October the public can attend community-based workshops in managing food waste and upcycling everything from fashion to furniture. The idea is to bring people beyond the idea of “reduce, reuse and recycle” to a more conscious prevention of waste in the first place.

The Community Reuse Network of Ireland is keenly aware of how far we need to go to embrace the reuse agenda. “Currently, we reuse about 1 per cent of consumer goods that are discarded for recycling, recovery or landfill,” says Claire Downey, the national co-ordinator of the network. “The main challenges are poor design or planned obsolescence. People still have reservations about second-hand goods, and there’s the hassle factor of finding what you want second-hand.”

The network is made up of businesses that recycle computers, furniture, mattresses, paper, plastics, textiles, electrical and electronic equipment, and even paint. Its members also include the Irish Charity Shops Association, Free Trade Ireland’s online exchange of household goods, and the Smile Resource Exchange, which connects businesses disposing of materials with businesses that need them.

The network is encouraging people to pledge to do one small thing during Reuse Month. “It can be as simple as always carrying a reusable cup, repairing an item of clothes instead of throwing it away, or buying nothing new during October,” says Downey. People can share their pledges and how difficult or easy they’re finding them using the hashtag #reuse16.

The Rediscovery Centre in Ballymun is running workshops for schools and skills development for adults throughout Ireland for Reuse Month.

Sarah Miller, its chief executive, says that Reuse Month is an opportunity for everyone to get involved and show off the potential to create jobs and promote economic growth in Ireland.

“Our current economic model relies on cheap energy and easily accessible materials, which is unsustainable,” she says. “Reuse and repair extends the products’ life cycle, and maximises the value of resources by keeping them in circulation longer. Reuse has a huge role to play in our transition to the circular economy.”

The Community Reuse Network of Ireland is hosting an international conference on October 12th to explore new business models. “Many businesses in the reuse sector are social enterprises, so not only are they providing environmental services but they are also providing training and work for the long-term unemployed and for people with disabilities. In some cases the products are passed on for free to schools and charities, locally and overseas,” says Downey.

Speakers at the conference include Mud Jeans, an innovative online business that sells and leases new, second-hand and recycled jeans. It is driven by both ethical and economic rationales. The fashion industry is the second most polluting in the world, and it takes 7,000 litres of water to make one pair of jeans. And from an economic point of view, there’s a big market out there.

Behind all these social, ethical and environmental enterprises is the European Commission’s push towards a circular economy, which its president, Jean-Claude Juncker, would like to see within his lifetime. The commission is spearheading an initiative to support ecodesign, for example, by rewarding products that are easier to repair, that are more durable and that use scarce raw materials with care.

By 2030 the commission expects reuse, recycling and resource efficiency to save the European economy €600 billion a year. The circular economy could save Ireland an estimated €1.65 billion a year.

Downey says that more innovative businesses will be needed to meet these goals . “It takes time to repair and remake things, and although reuse creates a greater variety of things we are competing against cheap manufacturing overseas.

“We want Government departments and local authorities to show leadership in buying things second-hand for their own use.”