Renovation of historic Kilmainham courthouse to go ahead

The 19th-century building will become part of Kilmainham Gaol museum 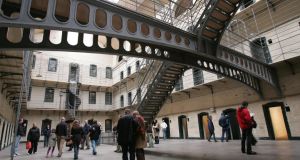 Struggling to meet demand: visitors in Kilmainham Gaol museum. The renovated courthouse will serve as a ticket office and collection point for the museum. Photograph: Frank Miller

Dublin City Council has granted planning permission to the Office of Public Works to restore and develop Kilmainham courthouse.

The courthouse, a protected structure built in 1820, is to become part of Kilmainham Gaol museum.

Its restoration and development will double the museum’s size and help ease pressure on demand from visitors.

Sited next to the gaol in Dublin’s south inner city, the courthouse will serve as the ticket purchase and collection point for visitors coming to the museum. The main courtroom will be fully restored using existing furniture, the majority of which dates from 1865. Other rooms will be used for a bookshop and cafe.

Outhouse buildings, formerly coach houses, will also be converted as part of the project, to provide new toilets for visitors. Other works will include building an internal mezzanine bridge to link the east and west wings, changes to the front railings outside to provide two new side gates, and realignment of the stone entrance to the front.

It functioned as the seat of local government administration for Co Dublin and also accommodated the elections of parliamentary representatives. It ceased as a court in 2008 and was handed over to the Office of Public Works last year. The gaol attracts more than 300,000 visitors a year and struggles to meet demand for tickets. Its website at Heritage Ireland currently advises visitors to arrive early to avoid disappointment.

One of the largest unoccupied gaols in Europe, it was opened in 1796 and closed in 1910, before being reopened between 1916 and 1924 to house political prisoners. It is probably best known as the prison where 16 leaders of the Easter Rising were executed.

There were no objections to the development, according to its planning report. The council’s conservation officer believed integration of both sites was “a good conservation option” and would improve the visitor experience of the site.

The OPW hopes to have the work completed for the 2016 commemorations and has already put it out to tender.

A spokeswoman said the cost of the project was not yet known and would be “commercially sensitive”.

Damien Cassidy, chairman of the board of visitors in Kilmainham and one of the original trustees of the Kilmainham Gaol Restoration Committee set up in 1960, described the courthouse as “a magnificent structure”.