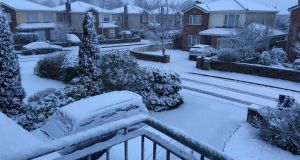 The unseasonable cold snap will continue this weekend but snowfall is not likely.

Friday night will be cold and breezy overnight with further rain or hail showers at times on east and north facing coasts, but mainly dry elsewhere, with some clear spells.

A ground frost will form, with some icy patches on untreated surfaces before dawn, as the brisk northerly winds moderate a little.

A status yellow warning was in in place for Leinster, Cavan, Monaghan and Donegal on Friday, with snowfall in several areas.

Met Éireann meteorologist Pat Clarke said the temperature would remain around 5-8 degrees this weekend when it should be between 8-11 for this time of year.

“There will be some frost on Friday and Saturday night but it is not likely to snow again this weekend,” he said.

Mr Clarke said Saturday night would be much colder than Friday night with temperatures to drop to below freezing.

“It will feel much colder on Saturday due to the cool northerly breeze coming in. There may be a few showers but Saturday will be a dry, cool day overall,” he said.

Mr Clarke said Sunday would see more spells of rain and there may be sleet in the northwest of the country.

He said next week would be a “mixed bag” with more cold temperatures and sleet but that snowfall was not likely.

According to Met Éireann, it will be cold on Monday but it will be drier overall with some bright spells and scattered wintry showers while temperatures on Monday night will be below freezing once again.