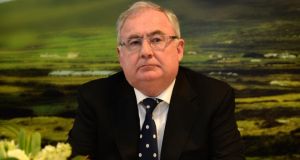 Minister for Communications, Energy and Natural Resources Pat Rabbitte: “If Germany, France and Britain are not undergrounding, is it reasonable for people to expect us to do so?” Photograph: Dara Mac Dónaill/The Irish Times

Minister for Communications, Energy and Natural Resources Pat Rabbitte has said he expects a statement this week from an independent panel to review all the options for the controversial Grid West proposed by EirGrid.

EirGrid last week unveiled details of a 113km underground route from Moygownagh in northwest Mayo to Flagford in Co Roscommon as an alternative to a €240 million overhead pylon proposal for the same Grid West route which attracted huge local opposition.

The cost of the underground alternative has yet to be established but Mr Rabbitte said the independent review panel, chaired by former Supreme Court judge Catherine McGuinness, would look at the procedures involved to ensure that it was properly costed for comparison purposes with the overhead route.

Mr Rabbitte said he had not met the group since its establishment but he was confident it had supervised the integrity of the process of looking at the underground option compared to the overhead option to ensure it was done in line with best practice and not at the behest of any vested interest.

He said he would expect a final decision on the Grid West by the late autumn, but while he was reluctant to be drawn on what option would ultimately be chosen, he did point out that generally, most European countries tended to opt for the traditional overhead option.

“I’m always curious to know why the wealthiest economies in Europe have overhead traditional transmission grids – 97 per cent of transmission in Europe is overhead – if Germany, France and Britain are not undergrounding, is it reasonable for people to expect us to do so?”

Mr Rabbitte said that irrespective of which option was chosen for Grid West, he said he was concerned about the impact local opposition could have to the entire Grid Link project which is designed to provide Ireland with a modern power infrastructure system.

“It is getting more difficult to build out big infrastructure in Ireland – somebody wrote a letter to The Irish Times a few months ago, saying isn’t it a good job we have the railways because you could never build them now. It is a problem and it is a concern.”

Mr Rabbitte was speaking in Cork where a new seismic survey was announced for the Porcupine Basin which, he said, would help Ireland to secure buyers for a new round of exploration licences in the region.

“Compared to the old days in terms offshore exploration, nowadays we are far better equipped with the seismic data and geological information . . . the fact that a big research project like this is focusing on the Porcupine Basin is very valuable,” he said.

The Minister noted that one of the sponsors of the project was Providence Resources and that its Drombeg exploration prospect lay within the 4,300 km2 which will be surveyed by the state-of-the-art Polarcus Amani, which tows a seismic array of equipment about 1.4km wide by 8km long.

Mr Rabbitte said the recently published report looking at the fiscal terms for oil and gas exploration in Irish waters would be debated in the Dáil this week.

He hoped that it would generate interest among the oil and gas exploration industry.

The report, by international consultants Wood MacKenzie, recommended a change to all licences issued from 2015 that would see the state increase its maximum take from 40 per cent to 55 per cent through a combination of corporation tax and petroleum profits tax.

“I think this is a very well-judged regime,” he said, adding that it was designed not to deter the investment that the State needed to secure for the expansion of exploration in Irish waters. This was a hugely important issue which had generated “a political brouhaha about the State’s take”.

The report’s principal recommendations were that Ireland should maintain a concession system with the oil and gas industry, rather than the State, bearing the risk associated with investing in exploration.