Rabbitte argues fracking has been a ‘game changer’ in US 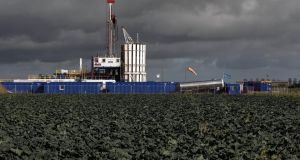 The Cuadrilla shale fracking facility in Preston, Lancashire. Minister for Energy Pat Rabbitte has said the economic impact of the shale revolution in the United States should not be underestimated when considering the controversial extraction methods of hydraulic fracturing or fracking.


Minister for Energy Pat Rabbitte has said the economic impact of the shale revolution in the United States should not be underestimated when considering the controversial extraction methods of hydraulic fracturing or fracking.

Mr Rabbitte said he had an open mind on the practice, which extracts oil and gas by pumping high-pressure water and chemicals into shale formations deep underground.

However, he said the Government’s approach to fracking would be determined by the outcome of research being carried out by the Environmental Protection Agency into its effects on the environment and on health. That research would be completed at the end of 2014 and Mr Rabbitte said that no decision on issuing licences would be taken until then.


Sound scientific advice
The overall message, he told the information session on fracking at the Roya

l Irish Academy on Dawson Street, was that decisions on fracking would be made based on sound scientific advice.

The Minister also said he would be raising the issue for the first time at the meeting in Dublin next week of energy ministers from European Union states.

Mr Rabbitte said there was considerable genuine concern about the potential environmental and health considerations. However, he said his view was that the public debate had “exacerbated those concerns”.

noted the experience in the US where fracking had been a “game changer” in its energy markets. Mr Rabbitte said that in Europe many countries had banned the practice, with the exception of Poland, the United Kingdom and some eastern European countries.

“The shale revolution in the US is having a very positive impact on US competitiveness,” he said. “EU business is feeling the impact as the US moves to capitalise the advantages. The shale revolution is a game changer, the effect of which must be considered on this side of the Atlantic.”

Mr Rabbitte said the ultimate goal of the Government was to maximise the benefits to Ireland of its indigenous oil and gas resources. He added that it must also ensure that extraction was conducted safely.