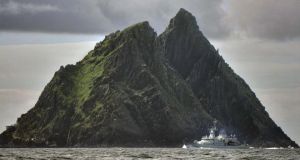 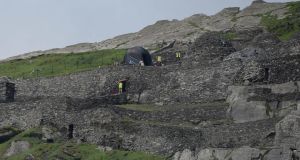 Filming of the new Star Wars franchise on Skellig Michael off Co Kerry is expected to bring “hundreds of thousands” of extra tourists to Ireland, according to Failte Ireland – but environmental groups have expressed “extreme concern” about the project.

Minister for Heritage Heather Humphreys granted permission on Tuesday for Lucasfilm to shoot scenes for Star Wars: Episode VII - The Force Awakens on the island, which is classified as a UNESCO World Heritage Site due to the settlement of “the first Irish Christians” there.

“The reach of a global brand such as Star Wars is just phenomenal,” said a spokesman for Failte Ireland. “It’s absolutely priceless in terms of raising Ireland’s profile abroad. The films have a very strong fan base and anything linking us to Star Wars is going to be of major benefit.”

Lucasfilm shot on the site for three days last year for the movie. During one helicopter flight in advance of filming, kittiwake chicks in nests on a ledge were swept into the sea by the downdraught and devoured by gulls.

Ms Humphreys said “strict environmental and ecological conditions” are being put in place to ensure there is no negative impact on the monastic island and its birdlife.

As part of these conditions, an ecologist and specialist staff from the National Parks and Wildlife Service and the National Monuments Service will be present for the duration of the filming, which is expected to last two to four days.

The officials “will have the authority to stop or modify filming at any point, should any concerns arise”. Peak activity levels during filming will involve about 100 people.

She said “months of preparatory work” has involved a birds’ survey, as well as a “highly detailed” ecological and screening assessment of the proposed work, and “stringent bio-security protocols”.

The main protection measures being implemented include limiting the seasonal timing of the project to September when breeding seabird species of the Skelligs “have left the island or completed their breeding cycles”.

There will also be controls for helicopter usage and dusk filming, while on the ground activities will be “confined to limited and specified areas”.

An Taisce spokesman Charles Stanley-Smith said the decision by Ms Humphreys was “of extreme concern” and that the organisation was considering a legal challenge.

“The Minister’s current assurances are in the context meaningless to us, and we can have no confidence in her, or her administration on this matter,” he said. “The specific impacts and the consequential impacts to the site are of extreme concern.”

A statement from BirdWatch Ireland said it had “serious concerns” over the filming. “Our concerns are in relation to the breeding populations of two vulnerable seabird species that are currently nesting on the island, namely the Manx Shearwater and the European Storm Petrel, which are highly sensitive to disturbance,” it said.

The group said it was “particularly concerned” about plans to conduct filming on and around the island after dark by helicopter, and that “thousands” of European Storm Petrel chicks, as well as “a significant number” of Manx Shearwater chicks, are still in their nesting burrows and cavities in the island’s walls and beehive huts.

“The colonies on the island are amongst the largest in the world, and the site is of enormous international importance for both species,” it said. “Due to their nocturnal habits, however, they generally go unnoticed by visitors.”

Irish Film Board chief executive James Hickey welcomes the decision and said the film would “project images of Ireland throughout the world - generating tourism - particularly in this case to Ireland’s western seaboard and Wild Atlantic Way”.