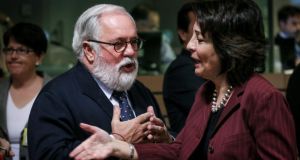 Northern Irish fishermen have accused Dublin of selling them out at last week’s EU fish talks in Brussels.

The decision to impose a cut in the quota for prawns, one of the island’s most important fisheries, has been described as a “disaster” for the North’s fleet by the Anglo-North Irish Fish Producers’ Organisation (Anifpo).

“Of course the negotiation was not helped by officials from the Republic of Ireland indicating to the European Commission several weeks ago that their industry could live with a reduction in the quota for prawns,”Anifpo chief executive Alan McCulla has said.

“As well as being rubbish, this was an amateur approach to this process and succeeded in putting the Northern Ireland team and especially our Minister on the back foot from day one,” he said in a statement.

“It is somewhat ironic that in her opening statement at the council, the EU’s fisheries commissioner, Maria Damanaki, singled out fishermen in the Irish Sea, specifically those from Northern Ireland, for praise for the tremendous strides they had made over the past two years in identifying and adopting a range of measures designed to secure sustainable fisheries. . .

“The commission, by imposing this quota reduction, have rewarded our industry for all their endeavours with a huge slap in the face.”