Fears mount that major rivers could burst their banks 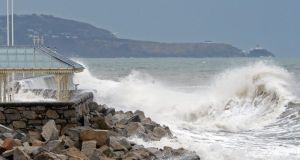 High waves wash over the bandstand, forcing the closure of the East Pier, Dun Laoghaire on Monday. Photograph: Eric Luke / The Irish Times

Gardaí have warned parents to stop putting their children at “outrageous” risk by walking near flooded waterways and piers.

Fears were mounting at the National Coordination Group briefing today that Ireland’s major rivers, including the Shannon, Nore, Slaney and Barrow, were are risk of bursting their banks in the coming days.

A succession of storms from the Atlantic are expected to hit from Tuesday to Friday next week.

Inspector John Ferris said gardaí were appealing for parents to be very careful around flooded areas and not to put their children danger.

“It is absolutely outrageous that children are put at risk this way,” he said.

“Nature is beautiful but nature can be a beast.

“It can be a disaster. We don’t want it to end in tragedy.”

Brian Kenny, national director of Fire and Emergency Management, said people swimming in flooded waters did so “with a lot of risk”.

“Flood water by its very nature carries a lot of bacteria,” he said.

Mr Kenny said emergency services were on 24-hour high alert across the country from tonight and into next week.

“Everyone should take regards of the weather warnings as they’re issued and heed them,” he said.

“The whole idea is for people to stay safe and their property protected. It can happen to anybody.”

He said the main threat was slow moving rivers; including the Shannon, Blackwater, Nore and Slaney, that are already swollen and in danger of bursting their banks.

Mr Kenny said there was also a worry from smaller, faster moving streams of water overflowing.

Munster were likely to get hit the hardest, with heavy rainfall to start at 3pm today.

Met Éireann have raised their warning for gale force winds to orange for marine areas, which is the second highest alert for capacity to impact significantly on people in the affected areas.

The national alert remains at yellow, which is a lower grade of warning telling people in risk areas should be aware and prepare.

The army and civil defence are on standby and ready for immediate action.

Helen Faughnan, assistant secretary for the Department of Social Protection, said emergency clinics had already been set-up around Limerick with more than 150 people looking for financial help so far.

“It’s quite busy there,” she said.

She said the department had made 50 house calls to people in distress not able to get to the clinics.

Paul Crowe, director of services from Limerick City and County Council, said they would closely monitor the situation and keep in contact with the ESB regarding rising water levels on the Lower River Shannon.

A spokesman for Clare County Council said south east of the country was particularly “vulnerable” near the Shannon and urged residents to be careful.

Atlantic storm Ruth will move its way eastwards across Ireland tonight and Saturday, bringing gusts of up to 110km/hr. Southerly winds will hit average speeds of 45-65km/hr, and flooding is expected from persistent heavy rainfall.

Sunday will continue with strong winds, heavy spells of rain and frost at night.

Meteorologist Jean Byrne said once the yellow weather alert ends at 12pm on Satuday winds should ease, but new alerts could be issued again early next week.

“It did look threatening for next week but not as bad today so we’ll keep an eye on it,” she said.

“While not as high as they were, tides will be high and there is a risk of flooding,” she said.

Minister for Agriculture Simon Coveney said with the unprecedented bout of bad weather he recognised the hardship being experienced by farmers as a result of very wet land and full slurry.

Mr Coveney said he wanted to reassure farmers help was there and not to be worried as his department would take a “common sense” approach in relation to inspections.

He said for example where there had been severe storm damage, including broken fences or debris, they would not be penalised under the direct payment schemes.

Minister of State for the Office of Public Works Brian Hayes said Cork’s flood defences were a priority.

He said construction of the country’s biggest flood defence scheme, a three year project, should start by the end of 2015.

“It’s not acceptable the second largest city in the Ireland has to have its business life totally disrupted every time this occurs,” Mr Hayes said.

Mr Hayes said the money for the plan, estimated to cost €50-€100 million, was available and would come from the capital investment scheme.

He said in the meantime the Government would work with people on small measures that could help stop damage caused by the floods.

The Road Safety Authority (RSA)have an issued a road safety alert ahead of the heavy rainfall and flooding this weekend.

The authority have warned motorists to slow down, watch for fallen debris and to be aware of strong cross winds.

For flood advice go to www.flooding.ie