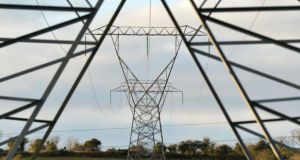 Overhead lines are the most effective option for the North South Interconnector, according to a new draft strategy published by EirGrid.

The strategy says there remains a clear need for the North South interconnector and that the existing preference of a 400kV overhead line remains the most appropriate solution for the project.

EirGrid also says the transmission system in the south east, Grid Link, may only require an upgrade instead of a new installation.

“Changing demand forecasts, a slower rate of growth, upgrade works on existing lines and advances in technology make possible an alternative that could address the need for reinforcement without any new infrastructure,” the company said.

Eirgrid chief executive Fintan Slye said “series compensation” technology could be introduced to the grid for the first time meaning the project in the southeast, which had been met with loud protests from locals, includes the option of upgrading existing power lines.

Mr Slye said the strategy is the latest review of the company’s approach to developing electricity transmission infrastructure.

Mr Slye said Ireland has changed a lot since the Grid25 srategy was published in 2008. “As a state company, our job is to work on behalf of all citizens to ensure a secure, affordable and sustainable electricity supply,” he said.

The Irish Farmers Association said Eirgrid’s announcement to work on existing infrastructure, rather than develop new electricity projects in the South East (Grid Link), and to explore undergrounding on Grid West, was a significant response to genuine concerns raised by farmers and local communities.

The IFA’s environment and rural affairs chairman Harold Kingston also called on EirGrid to ensure that all options are presented to An Bord Pleanala.

“An Bord Pleanala, as the highest planning authority in the State, must be in a position to make their planning decision based on having all facts and options on the table,” he said.

EirGrid said the new strategy was influenced by public feedback as well as advances in technology and a desire to minimise the need for new infrastructure.

The company has previously said it would move to a “more community-focused approach” when developing projects.

The move came after Eirgrid faced a wave of criticism over how it interacted with communities based near the three proposed high-voltage power lines.

Locals were concerned about the visual, environmental and health implications lines and pylons might have.