Reports conclude that external walls of 21 and 22 Vicar Street date mostly from 1881 and 1908, respectively 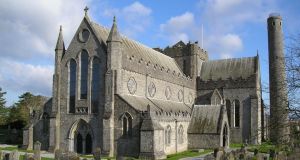 
Reports on further archaeological excavations in Kilkenny have shown that two houses near St Canice’s Cathedral scheduled for demolition on Vicar Street to facilitate a controversial road scheme contain only “recycled” medieval remains.

The houses at 21 and 22 Vicar Street are due to be demolished to make way for the central access scheme, a €10.7 million project that includes a new bridge over the river Nore. It was approved by An Bord Pleanála in 2011.

The latest surveys – commissioned by Kilkenny County Council following reports that one of the houses contained remnants of a late-medieval gable – were carried out by historic buildings consultant Rob Goodbody and archaeologists Valerie J Keeley Ltd. Mr Goodbody concluded that the external walls of 21 and 22 Vicar Street date mostly from 1881 and 1908, respectively, with “small remnants” from the 18th or early 19th centuries – although “some cut stones were found that could be of medieval date”.

His thesis that these elements had been “reused from an earlier building, not necessarily on this site” was dismissed by Cóilín O Drisceoil, director of the Kilkenny Archaeological Society, as “pure speculation [with] no new evidence”.

Had the survey established that any of the gable pre-dated 1700, the final cut-off point for the medieval era, Minister for Heritage Jimmy Deenihan would have come under pressure to use his powers to designate it as a national monument.

Although an identical pre-1700 feature had been found nearby, Mr Goodbody said: “The evidence for the date of the gable wall shows that it cannot be of medieval date ... whatever the circumstances under which this stone-lined opening came to be in this location.”

A parallel report by Valerie J Keeley Ltd on a series of archaeological investigations in the immediate vicinity of Vicar Street concluded that the earliest remains found there dated from the late 17th/early 18th century.

The report noted that the “deconstruction” of the two buildings would be carried out under archaeological supervision, with “hand removal” of any artefacts for storage.